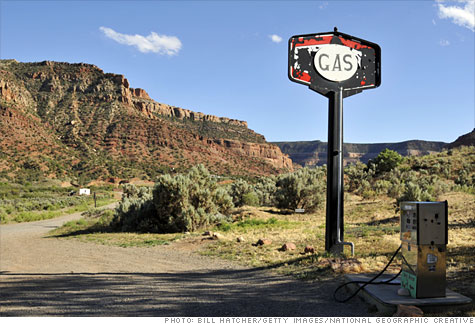 FORTUNE -- In the cutthroat fuel industry, some refiners are pulling ahead by taking advantage of a quirk in the United States gasoline market. Gas prices in the U.S. fluctuate with the global, volatile oil market, but gasoline prices within the country are far from uniform. Part of that is because the Western market requires a different, more expensive mixture than the gasoline sold in states near the Gulf of Mexico.

The premium on gasoline on the West Coast was fueled by a series events starting with a smog problem in California and ending with a handful of companies creating a tight market for clean-burning gasoline. California mandates more eco-friendly fuel, and other states in the West are starting to follow suit. This means that companies who have been selling to that market only expect the profit margin on Western gas to grow.

For example, Fortune rated one company, Western Refining (WNR, Fortune 500), which has access to the Western gasoline market, one of the best performing stocks in 2010. Western Refining reported a third-quarter net income of $6.9 million for 2010, compared to its net loss of $4.8 million in the same period of 2009.

The company succeeded for several reasons. It shed underperforming facilities in the East. Out West, "we had two of the most profitable refineries on a gross margin basis," Western Refining CEO Jeff Stevens explained at a symposium in December. That's partially because the company fine-tuned its cost structure at those refineries and because the cost of oil is increasing again. But the high premium for gasoline out West certainly helped.

Western Refining is one of a limited number of refineries have the capacity to make the specific mixture required for clean fuel. That means that these refineries can charge more for their product. "You're essentially creating a segmented market-you're limiting the amount of suppliers that can compete," says Frank Wolak, a Professor of Commodity Price Studies in Stanford's Economics Department.

Californians have been buying expensive gas for decades. The state had terrible smog problems in the 1990's and was forced to reduce air pollution after the Environmental Protection Agency passed the Clean Air Act. Since then, California has had to buy gasoline that produces fewer pollutants than fuel sold in the rest of the country.

Only a small number of refineries switched to produce that kind of gasoline. In a report on the high price of California gasoline in 2004, Wolak wrote that six refiners own more than 90 percent of the refining capacity in the state. Now, he says the same set of refineries dictates the market.

Western Refining is one of them, and it's in a good position to benefit from new demand for clean-burning gasoline. The company has two major refineries: one in El Paso in west Texas, and the other in Gallup, New Mexico near the four corners. The Gallup refinery distributes to cities including Phoenix and Tucson that are starting to buy cleaner burning gasoline.

The cities are responding to the EPA, which declared back in 1997 that the Phoenix Metropolitan area fell short of the National Air Quality Standards, then demanded that the state come up with a plan to fix it. In 2004, the EPA approved Arizona's plan, called the Arizona Cleaner Burning Gasoline program.

Now, the Arizona gasoline market pulls in the same profits for refiners as California, Western Refining CEO Stevens says. He expects the trend to continue.

"Looking forward we're seeing that the West coast continues to remain-- particularly on the gasoline side--really the strongest market," Western Refining's Stevens said at the symposium.

The market will stay profitable for the foreseeable future, Wolak says, because the few refineries that produce the cleaner gasoline mixture will keep control without much competition. "If you had a national market among all the refineries, that would become much more difficult."

He also says that while it might make sense environmentally, a national market for clean burning gas won't happen for a while, if ever. Meanwhile, refiners can continue to meet the needs of state governments demanding cleaner-burning fuel, and keep pocketing the premium.

Dominion CEO: Patience and policy on the path to renewable energy