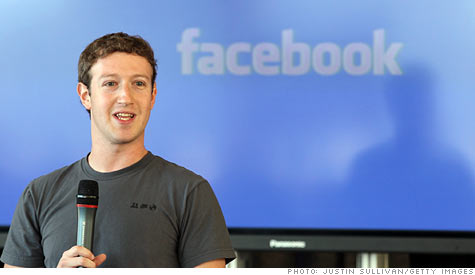 NEW YORK (CNNMoney) -- Facebook's days as a secretive and private company are numbered: By early 2012, the social networking giant is poised to either hold an initial public offering or begin disclosing its financial results.

Goldman Sachs is in the process of distributing deal information to wealthy clients interested in joining a Facebook investment pool it is creating. In that deal memo, Facebook says that it intends to pass a key 500-shareholder mark this year, according to a report in the Wall Street Journal.

When companies have more than 500 shareholders, they're required to make significant financial disclosures -- though they can choose to remain private and keep their stock from trading publicly. However, most companies facing mandatory disclosures opt to go public.

The Securities and Exchange Commission gives businesses lots of time to prepare for that milestone. Companies have until 120 days after the end of the fiscal year in which they cross the 500-shareholder line to begin making their disclosures. If Facebook tips the scale this year, that gives it until April 2012 to start filing financial reports.

Facebook's IPO plans have long been a subject of intense Silicon Valley speculation, but the issue heated up this week after the New York Times reported on a Goldman Sachs investment that values the six-year-old company at a staggering $50 billion. That's up sharply from the $15 billion valuation Facebook sported three years ago, when Microsoft shelled out $240 million for a 1.6% stake in the venture.

Going public can be painful for hotshot tech companies, which still struggle with the aftershocks of the dot-com implosion. Being public subjects them to significant regulatory requirements -- and to the mercurial tempers of Wall Street analysts and investors. As a result, many of the industry's emerging stars have tried to hold off on their public debuts.

But as companies give away equity to employees and venture capitalists, staying below the 500-shareholder limit becomes a constant challenge. Private investors vie to snap up shares from early stakeholders in private deals and, increasingly, in secondary-market exchanges that operate like public markets. Those secondary exchanges are restricted to accredited investors with assets of at least $1 million -- a safeguard intended to prevent mom-and-pop investors from sinking their cash into risky ventures.

Facebook has gone to great lengths to avoid being forced into public disclosure. By 2008, it had stopped issuing employees stock options and instead gave them "restricted stock units" that would only have value if the company went public or got bought. Those units cannot be sold or traded, and the SEC agreed that those who hold them would not count toward the 500-shareholder limit.

But early staffers and investors own Facebook shares they can sell, and they've been actively unloading them on private exchanges.

Other hot startups, including Twitter, Zynga and LinkedIn, also draw strong interest from private investors, but Facebook is by far the most actively traded company, according to executives from the two most-active exchanges, SecondMarket and Sharespost.

Everyone into the pool: How to invest in Twitter