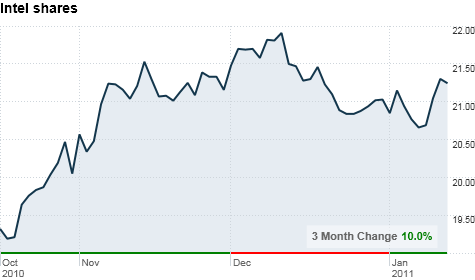 Intel posted earnings per share of 59 cents. Analysts polled by Thomson Reuters had forecast earnings of 53 cents per share.

Revenue for the Santa Clara, Calif., company rose 8% over the previous year to $11.5 billion, topping analysts' forecasts of $11.37 billion.

"2010 was the best year in Intel's history. We believe that 2011 will be even better," Paul Otellini, Intel president and CEO, said in a written statement.

Revenue from Intel's closely-watched Atom microprocessor and PC group was flat compared to the prior quarter, while its data center group posted a 15% increase in revenue.

The current quarter looks to be strong as well.

"The guidance for the first quarter of 2011 was much better than people expected," said Daniel Amir, an analyst at Lazard Capital Markets. "That was a positive surprise."

Amir said Intel's new Sandy Bridge processor line is likely to boost revenue. The bottom line will also be helped by an extra week in next quarter's calendar.

Meanwhile, the company's gross margin in the fourth quarter was 67.5%, above expectations and slightly improved from last quarter's 67%.

The strong quarterly results pushed Intel to new full-year highs as well. Revenue of $43.6 billion, operating income of $15.9 billion, net income of $11.7 billion and earnings per share of $2.05 all set records.

It's already been a busy week for the chip manufacturing sector.