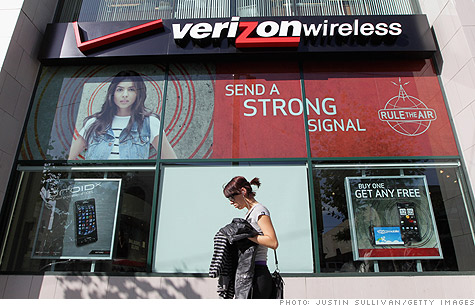 Verizon is about to end a special discount of up to $50 for renewing smartphone contracts. By Stacy Cowley, tech editorJanuary 13, 2011: 1:36 PM ET

NEW YORK (CNNMoney) -- With a rush of iPhone sales on the horizon, Verizon Wireless is getting stingier with the discounts it offers those who want to upgrade their smartphone.

Starting next week, the company is ending its longstanding "new every two" deal. The promo gives existing customers credits of $30 to $100 off the already-discounted price of a new phone, after they have completed at least 20 months of a two-year contract.

The change comes just days after Verizon unveiled its long-awaited iPhone, which it will begin selling next month.

Like every other major carrier, Verizon Wireless subsidizes the smartphones it sells. A 16 GB iPhone 4 costs $200 if a customer signs a new two-year Verizon contract, but it sells for $599 without the contract. Other hot devices carry similar subsidies. For example, the Motorola Droid X costs $200 after a mail-in rebate with a two-year contract. Without the contract, the Droid X costs $570.

Both brand-new customers and existing customers who have completed their contracts are eligible for the subsidized pricing. But Verizon's unique "new every two" deal offered customers an additional credit -- knocking a few more dollars off the discounted price of a new phone.

Current Verizon customers who are eligible for "new every two" credits will still be able to use them toward the iPhone, shaving a few more dollars off the $200 price tag. But starting Jan. 16, Verizon will no longer offer the credit on new contracts and renewals, company officials told SmartMoney.

The change means that those who renew their Verizon contracts next month -- when the iPhone goes on sale -- won't be able to take the credit two years from now, when they next become eligible for a phone upgrade.

A Verizon Wireless spokeswoman confirmed the change for CNNMoney, but said the company will still be offering early upgrade incentives.

"A simpler program is being introduced to replace the 10-year-old 'new every two' and annual upgrade programs," Verizon Wireless said in a written statement. "Customers who sign up for service on or after January 16 will still be eligible to upgrade their devices at current promotional prices well before their contract expires -- after 10 months on one-year contracts, after 20 months on two-year contracts."

Customers under contract before Jan. 16 will be grandfathered in and can use the credit one last time. That means next month's iPhone buyers will be able to use the additional discount -- if they've been with Verizon for more than two years. With the additional credit, they'll be able to get an iPhone for $100 to $170, depending on the terms of their contract.

First-time Verizon customers and those who are taking out new contracts but aren't eligible for "new every two" credits will pay $200 for the entry-level iPhone.

Verizon has quietly trimmed its "new every two" offering before. In February 2009, it cut the program's top discount in half, paring it back from $100 to $50. Some customers who started contracts before the change are still eligible for the bigger credit.

Ending the credit program will help Verizon stanch some of the losses it takes when customers upgrade to flashy new devices. Buyers willing to sign long-term contracts can snag new smartphones dirt cheap -- often for mere pennies -- but the carriers still need to buy the phones from their manufacturers. For the most popular phones, the cost is typically around $500 per device.

Carriers can recoup their upfront investment through the monthly fees customers pay for service. That's why they love to lock buyers into multi-year contracts -- the longer the better. And every month a customer holds off on upgrading, the phone provider's profit margin gets better.

But with smartphone technology improving at warp speed, customers are often impatient to get hold of the latest new creation. Early upgrade discounts can be a powerful weapon.

In June, AT&T (T, Fortune 500) offered discounted iPhone 4 pricing to any customer eligible to upgrade in 2010. That move helped it lock in millions of contract renewals just ahead of Verizon's iPhone unveiling.

So while Verizon's "new every two" may be ending, its discounts and subsidies won't. In the fiercely competitive wireless space, carriers need every edge they can get to lure -- and keep -- their subscribers.

Want to ditch AT&T for a Verizon iPhone? It'll cost you