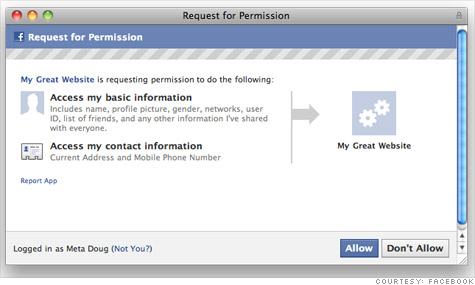 NEW YORK (CNNMoney) -- Facebook is giving app developers access to some of the most sensitive personal data it possess: Members' addresses and phone numbers.

The company slipped the change in quietly, announcing it late last week in a post on its developer blog.

But that may not be enough of a shield. Facebook frequently comes under fire for its constantly changing privacy policies, and many users find the tools it makes available for adjusting privacy settings very confusing.

Privacy researcher Christopher Soghoian thinks Facebook botched the message by publicizing the change on its the developer's blog.

The blog Inside Facebook, which obsessively tracks news about the social networking giant, says the new addition doesn't provide users with enough context.

"The biggest problem with access to contact information is that the permission requests for these highly sensitive data fields are not distinguished from requests for more benign data like a user's Event RSVPs or privileges like publishing to their stream," Inside Facebook writer Josh Constine says.

"For much of the content out there, it's going to be compelling enough or social enough that you're not going to say no," he says. "Consumers don't negotiate with Facebook apps. It's 'take it or leave it.'"

For those that take it, how safe will the data be?