A new contender for Buffett's job 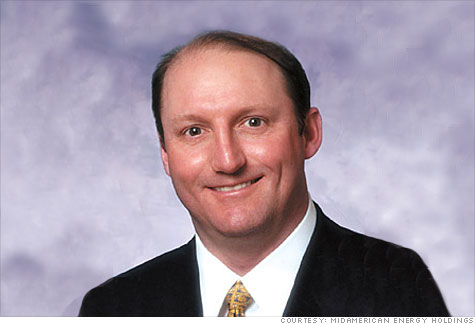 FORTUNE -- Warren Buffett's still-unrevealed succession plan is a subject of obsessive speculation in the financial world, where it receives a level of scrutiny that's typically reserved for Oscar nominees and presidential candidates. The latest shortlist of contenders comes courtesy of Vanity Fair, which, in a recent profile of Buffett, homed in on four CEOs of Berkshire Hathaway companies: Ajit Jain, who heads Berkshire's reinsurance business; David Sokol of NetJets; Greg Abel of MidAmerican Energy Holdings; and Matthew Rose of Burlington Northern.

Longtime Buffett watchers will recognize all of those names as successor candidates -- except one. Abel, described by Vanity Fair only as "Sokol's number two," is a new addition to the field.

Like many Berkshire leaders, the 48-year-old Abel, who declined through a spokesperson to comment, keeps a low profile. Schooled in Canada, where he became a chartered accountant, Abel is based in Des Moines today. There he oversees MidAmerican -- a group of utilities, natural-gas pipelines, and a real estate brokerage with combined revenues of $11.2 billion last year. He also sits on a number of boards, including the Mid-Iowa Council Boy Scouts of America; Kum & Go, a Midwestern convenience store chain; and the American Football Coaches Foundation.

Abel got into the utility business in 1992, when he left Price Waterhouse to work for CalEnergy, an independent power producer run by Sokol. When CalEnergy bought the U.K. utility Northern Electric in 1996, Sokol asked Abel, then the company's chief accounting officer, to move to Newcastle to handle the takeover. Walter Scott, a Berkshire Hathaway (BRKA, Fortune 500) director and major shareholder in MidAmerican, says he was impressed by Abel's handling of the task.

"Greg is the kind of person that, whenever he's been asked to do something, he's willing to go and do it," says Scott. "He picked up his family and he moved to England. He did an outstanding job."

When CalEnergy acquired Iowa-based electric and natural-gas utility MidAmerican Energy Holdings for $4 billion in 1998, Sokol again turned to Abel. He moved back to the States to become president of the combined entity, which took MidAmerican's name. A year later, Berkshire Hathaway joined forces with Sokol and Scott to take the entire company private.

In 2008, Sokol stepped down as the CEO of MidAmerican in order to take a more strategic role at Berkshire, leaving Abel as the utility's CEO. The following summer, Buffett asked Sokol to run NetJets, Berkshire's struggling fractional-ownership plane company. The move spurred many to hypothesize that Sokol, dubbed Berkshire's "Mr. Fix-It" by Fortune for his aptitude at turning around troubled companies, was Buffett's top candidate for the top spot at Berkshire.

But while Abel has long operated in Sokol's shadow, he has impressed the person who matters most: Buffett. In every shareholder letter since 2002, Buffett has praised both Sokol and Abel as "brilliant managers" and "huge assets" to Berkshire. Over the past decade, MidAmerican has grown at a healthy clip, mainly through acquisitions, and has boosted its net earnings more than 10-fold, to $1.2 billion.

One of Buffett's well-known skills is his ability to integrate companies into Berkshire's portfolio. Abel has shown a similar aptitude, according to Scott. When MidAmerican bought the regulated utility PacifiCorp in 2005 for $5.1 billion, Abel, then MidAmerican's president, was charged with dramatically reorganizing the company, says Scott. Since 2006, PacifiCorp, which is MidAmerican's largest holding, has more than doubled its earnings, to $788 million.

Scott praises Abel's ability to build relationships with state officials, who set the rates of return for regulated utilities like PacifiCorp. "He does an outstanding job of managing [MidAmerica's assets] and doing it in a way that people feel good about," he says. "When I say that, I'm talking about the regulators, his employees, the people he has worked for -- Dave Sokol and Warren."

Abel's first test as CEO came in September 2008, when MidAmerican attempted a takeover of Baltimore-based Constellation Energy (CEG, Fortune 500), a diversified utility whose commodities-trading business was whacked during the financial crisis. When Constellation's debt was downgraded, investors feared that the company would go bankrupt, and its stock plunged. Desperate for financing, Constellation accepted a buyout offer from MidAmerican that valued its shares at $26.50 -- a discount of more than 60% from where they were trading just three months before.

Sokol has been credited with initiating the offer -- he placed the first call to Constellation, Fortune reported, after receiving a green light from Buffett. But a proxy report filed by Constellation that October shows that Abel, too, was involved in every step of the negotiating process. Immediately after Constellation agreed to be bought by MidAmerican, the company received a significantly higher counteroffer from French power company Electricite de France. Constellation's CEO, Mayo Shattuck III, asked Abel to waive their exclusivity agreement so that Shattuck could get more information about the offer, but Abel refused, the proxy says, and the deal was finalized that evening.

Three months later, Constellation backed out of the deal, and MidAmerican walked away with a breakup fee of $175 million plus investment profits of $917 million, according to Berkshire Hathaway's 2008 annual report.

Given his relatively short tenure as CEO, Abel is still a long shot to run Berkshire. But he does have one significant advantage: his age. At just 48 years old, he's the youngest candidate on the list. Since Buffett has no plans to retire in the near future (he cheekily told Vanity Fair that he has a life expectancy of 12 years), Abel's youth makes him all the more likely to succeed.

Letters from The Giving Pledge