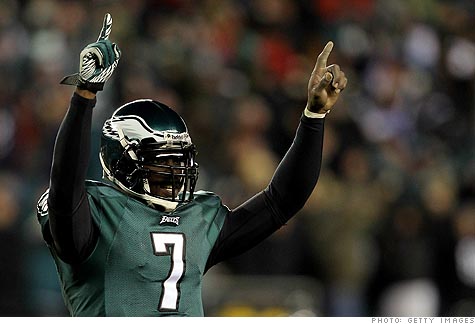 Unequal would not comment on what the deal was worth, and Michael Vicks representatives weren't immediately available for comment.

"I'm thrilled to be a part of the Unequal team," Vick said in a press release announcing the agreement.

Vick began wearing Unequal apparel after suffering a rib injury against the Washington Redskins early in the 2010-2011 season, the release said.

Unequal President Rob Vito said the company was proud to have Vick on board and addressed the 2007 dog fighting conviction that sent Vick to federal prison got him booted out of the league. "As a dog owner, I know the love of a pet...But as a Christian, I believe that people can repent and deserve a second chance."

Vick, 30, made his NFL comeback in 2009 after spending 21 months of his 23-month sentence in Leavenworth, Kan., federal prison. He served the last two months confined to his home in Virginia.

The case brought widespread attention to the illegal practice of dogfighting. It also cost Vick all his endorsements, including one from Nike worth $2 million a year.

Vick, who at the time had a 10-year $130 million contract with the the Atlanta Falcons, was one of pro football's top paid players prior to his conviction. He's since apologized for his actions.

"Everything that happened at that point in my life was wrong," Vick said of his involvement with the dog fighting ring in August 2009. "I want to be an ambassador to the NFL and the community," he said.

5 athletes who blew their endorsements