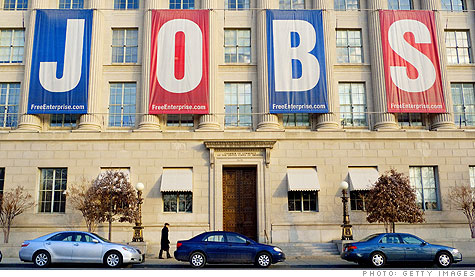 After months of trying to pin down a time that works for both parties, President Obama will march out of the White House on Monday morning and make his way across H Street to the headquarters of the U.S. Chamber of Commerce.

Once there, he will deliver a speech to more than 200 members of the Chamber, a business lobby that is among the most influential players in Washington.

The meeting is seen as another sign of the thawing relationship between the Obama administration and the business community. It took months to materialize after first being floated by the administration in November.

For Obama, it will mean playing nice with a group that has been vocally opposed to many of his policies.

Indeed, in the months leading up to November's midterm elections, the White House and Chamber lobbed rhetorical rocks back and forth at one another.

The Chamber opposed Obama on health care, tax policy, regulation and Wall Street reform. And they backed their words with cash. In 2010, the group gave millions of dollars in campaign donations to Republican candidates.

Obama responded by using the Chamber as a political punching bag in the final days of the campaign, accusing the group of funneling money from overseas to support Republican candidates.

But shortly after the election, both sides began to sing a different tune. Obama invited 20 CEOs to the White House for a conversation about the economy. The Chamber praised the move.

And during the lame-duck session of Congress, Obama and Republicans reached a compromise on a tax cut package that was supported by the Chamber, and he reached a free trade agreement with South Korea that won plaudits from the business community.

Then Obama had another "CEO summit," and focused much his State of the Union message on innovation and spurring job growth.

J.P. Fielder, a spokesman for the Chamber, said Friday the organization was looking forward to Obama's visit.

"From our perspective we are honored and pleased to have him coming over," Fielder said.