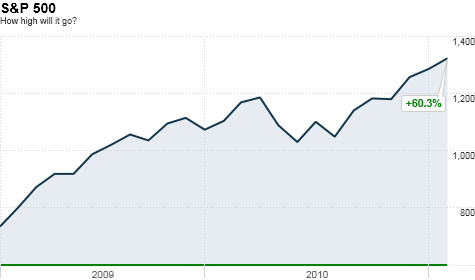 FORTUNE -- Many stock market analysts and financial journalists currently point to Professor Robert Shiller's cyclically adjusted price earnings (CAPE) ratio to prove their assertion the stock market is overvalued by nearly 45% (see Don't believe the rosy forecasts as an example). The CAPE ratio attempts to smooth out the cyclicality of earnings by dividing the S&P 500 price by the average of ten years of historical real earnings. The current CAPE ratio is around 24 times earnings while the long-term CAPE average is approximately 16 times -- this, according to CAPE proponents, implies that stocks are currently significantly overpriced by historical standards.

While the CAPE ratio can be useful when combined with other valuation methodologies to determine the relative attractiveness of the stock market, the ratio has significant limitations as a standalone valuation metric. Here are 9 reasons why investors should never rely on CAPE alone:

1. Most investors do not buy an individual stock based on what a company earned ten years ago. If this is true for individual stocks, then why would an investor buy a basket of stocks (e.g. the market) by evaluating earnings from ten years ago? Take Apple (AAPL, Fortune 500) for instance: given the explosive growth in earnings during the past few years, the stock would have appeared to be overvalued if ten years of earnings were used.

2. Equally important, the market looks forward, not backward. If a company (or the market) announces an earnings shortfall or lowers guidance, the company's stock (or market) will typically drop precipitously in value (the converse can also be true with an upside surprise). If individual stocks or the market were valued on a ten-year earnings basis, then significant stock price movements would be extremely limited because the vast majority of the earnings stream (e.g. the ten years of earnings) changes very slowly.

3. The CAPE ratio doesn't take into account the level of interest rates. In the early 1980s, the 10-year Treasury exceeded 15% at one point, which partially explains why the CAPE multiple reached a low of 6.6x during this period.

4. Even if an investor wanted to include some historical perspective, why give equal weight to earnings from ten years ago and those in the most recent year? At the very least, earnings in more recent years should be accorded a higher weighting than those in earlier years.

5. The ten-year period used for the CAPE calculation is an arbitrary one since it might include two recessions during some periods (which is true today for the current CAPE ratio) and only one or none during other time frames.

7. The CAPE long-term average ratio is calculated using market data from as far back as 1880. Yet it is unlikely that historical data is directly comparable, since accounting and reporting standards and the stock market structure and liquidity are very different today. The CAPE ratio uses reported earnings, which in the last recession were substantially impacted by goodwill write-offs and several bankruptcies (AIG alone reduced the 2008 S&P index earnings by $100 billion, or more than $10 per share, despite representing a small fraction of the S&P 500 market value). Finally, the CAPE ratio is calculated with real earnings and prices, which may skew the data as some economists consider the CPI index imperfect (a higher CPI than actual will increase trailing ten years earnings, thereby reducing the CAPE ratio).

8. To try to correct for any market and accounting differences between different periods, investors may prefer to calculate a CAPE ratio over a more recent time frame. For instance, the CAPE ratio average in the 55 years since 1955 (to eliminate the impact of World War II) is, at 19.2x, significantly higher than the long-term average.

9. Finally, approximately 45% to 50% of S&P 500 earnings come from outside the US versus a significantly lower amount even 30 years ago. This provides the benefit of diversified income streams and potentially higher growth rates due to the ability to enter new markets and presence in faster growing overseas markets, which should argue for a slightly higher market multiple than historically.

CAPE proponents will point out that if you purchase the market when the CAPE ratio is below its long term average, returns over the ensuing years are far higher than if the converse is true (Shiller's data show the nominal 10-year return ratio to be about 2.2:1 and real returns are even much higher). But since the denominator of the CAPE ratio is relatively fixed (e.g. ten years of earnings does not change rapidly), then clearly it is the numerator (e.g. the market price) that largely drives the CAPE valuation. This observation merely confirms that returns are likely to be superior if an investor buys when the market is lower. There are numerous examples where the CAPE ratio was above the mean (or even above 20x) and the subsequent 10-year returns were strong. Thus investors cannot always accept as gospel that an above average CAPE ratio indicates the market is overvalued and subject to a correction when the historical reality is that future returns are, on average, significantly lower yet still positive.

In March 2009, the CAPE ratio fell to below 14 or slightly lower its long-term average. According to CAPE proponents, this meant the market was just below fair value (Professor Shiller advocated waiting to buy the market until the CAPE ratio dropped below 10x). By July 2009, the CAPE ratio had risen to 16.7x, indicating the market was overvalued according to the CAPE analysis. If an investor had exclusively relied on the CAPE ratio and sold stocks at that time, he or she would have missed the subsequent 41% increase in the S&P 500 (and even larger moves in the other indices). The fallibility of this singular data point approach to valuation is analogous to an investor who looked only at the trailing 12-month S&P 500 multiple of 110x in March 2009 to conclude that the market was overvalued.

Granted, history does show average returns are significantly higher if investors buy when the CAPE multiple is low. Yet many analysts make a dubious leap in logic to argue that any CAPE ratio above the long-term average indicates the market is overvalued by a simple arithmetic calculation and should soon decline to the long-term mean ratio. This is not to dismiss entirely the usefulness of the CAPE ratio nor the possibility that the market today is overvalued, but merely to strongly recommend that the CAPE ratio be used in combination with other valuation metrics.

Jeff Westmont is the founder of Westwoods Capital, a hedge fund focused on consumer companies. He was formerly a Managing Director in investment banking at a bulge bracket investment bank.

10 signs the consumer is not dead

Netflix: How it's a bubble but not a short

How a bridge champ beats the market
Subscribe to Fortune