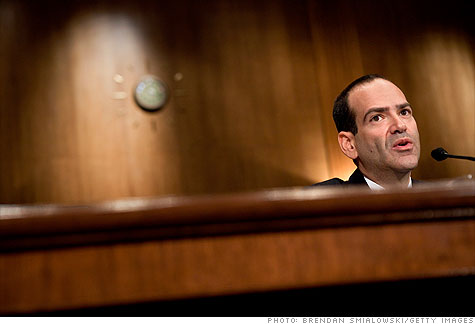 NEW YORK (CNNMoney) -- Neil Barofsky, the special inspector general of the Troubled Asset Relief Program, informed President Obama on Monday that he is resigning from his position, effective March 30.

"I believe that it is the right time for me to step down and pursue other opportunities," Barofsky wrote in his resignation letter.

Barofsky said he has fulfilled his goals related to TARP since his nomination by former President Bush on Dec. 8, 2008. These goals, he said, were "to build a robust law enforcement agency to bring to justice to those who sought to profit criminally from TARP" and "to ensure transparency in the operation of TARP."

He said he also achieved the goal of providing "effective oversight over the government's decision-making process to minimize instances of waste, fraud and abuse."

He said that he had only one co-worker when he started the "SIGTARP" job and was "working out of a small office in the basement of the Main Treasury building." Since then, he said the position has grown to 140 auditors, investigators and attorneys, with offices in Washington, New York, San Francisco, Los Angeles and Atlanta.

The team is now being led by Deputy Special Inspector General Christy Romero who will continue its mission.

The White House issued a statement that it was "grateful for Mr. Barofsky's service," noting that he had "provided strong oversight of the TARP program for the past two years."

Rep. Darrell Issa of California praised Barofsky for his "extraordinary commitment to public service" but he said the work that he began is not finished.

Issa said the next Inspector General needs to demonstrate Barofsky-style "vigilance, courage and commitment" in dealing with the 150-plus TARP recipient banks that have missed their regulator dividend payments.

Issa also said the next Inspector General needs to deal with the Home Affordable Modification Program, which "has fallen short of its goal to preserve home ownership."

Barofsky did not say what he plans to do next.

Where the budget cuts are