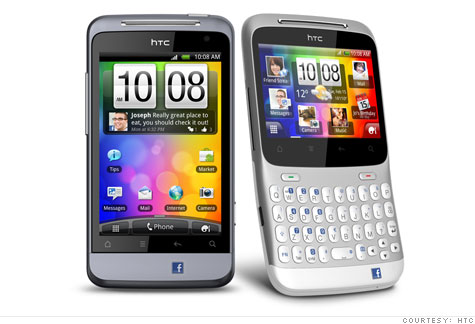 But there was something missing from the launches: Facebook.

Mark Zuckerberg appeared virtually via a pre-taped video at the HTC launch event, but the company didn't have a representative at the INQ Mobile booth. Despite having its logo plastered all over the conference, no one from Facebook physically showed up (in an official capacity, anyway).

The "Facebook phones" themselves are intriguing. HTC unveiled two devices: the ChaCha and the Salsa, both of which feature a dedicated Facebook button for access to core Facebook tasks like updates and places. Photos, status updates and location can be uploaded with one press of the button. Based on Google's latest Android release, Gingerbread, the phones are due out in the U.S. later this year are exclusive to AT&T's (T, Fortune 500) network.

London-based INQ launched two handsets as well at Mobile World Congress, the Cloud Touch and the Cloud Q. Both devices feature a homepage that serves as a visualized Facebook feed, including a display of friends' updates, pictures, videos and Web links. The phones also have launcher apps to Facebook chat, friends, messages, wall and notifications.

An official phone or operating system from Facebook has long been the subject of rumors, but the company hasn't yet diverged from its current mobile strategy of partnering widely. Facebook has gained 200 million mobile users by producing high-function third-party applications for smartphones, as well as a rich mobile website for feature phones.

"A lot has been made about a single Facebook phone, but this year, you can expect to see dozens of phones with deeper social integrations than anything we seen so far," Facebook CEO Mark Zuckerberg said in his recorded video at the launch event.

Facebook's mobile application already integrates well with most smartphones. It allows iPhone and Android users to utilize the camera to take pictures that upload straight to the social network, and it displays profile photos and updates from friends in users' smartphone contact lists.

Some devices like Windows Phone 7 have Facebook integration baked in, with information from the social network automatically flowing into a "social hub" that includes contact lists and status updates. As a result, some tech analysts have said that they don't see a need for an official "Facebook phone."

Facebook wasn't the only major technology company with lots of mentions and no presence.

Despite constant talk about the iPhone and iPad, Apple (AAPL, Fortune 500) was also absent from the conference, sticking to its recent strategy of announcing products exclusively at its own events relying instead on carefully timed leaks to keep itself at the center of the tech world's buzz.