Borders in bankruptcy, will close 200 stores 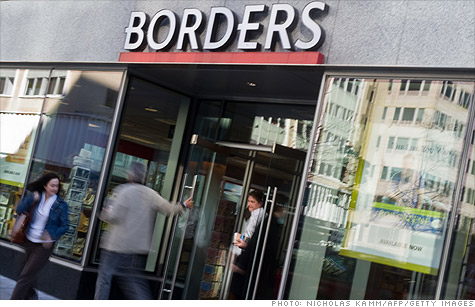 Borders will close 30% of its stores after filing for bankruptcy protection. By Aaron Smith, staff writerFebruary 16, 2011: 2:22 PM ET

NEW YORK (CNNMoney) -- Borders Group has filed for Chapter 11 bankruptcy, and plans to close 200 of its stores and reduce its staff, the nation's second-largest book retailer said Wednesday.

"It has become increasingly clear that in light of the environment of curtailed customer spending, our ongoing discussions with publishers and other vendor related parties, and the company's lack of liquidity, Borders Group does not have the capital resources it needs to be a viable competitor," the company said in a statement.

"As we do close down the stores, ultimately there will be a reduction in employees," said Borders spokesman Donald Cutler. But he didn't say how many workers would lose their jobs.

The company said it is closing 200 stores in 35 states, Washington, D.C., and Puerto Rico.,

Wall Street has been expecting the filing from the struggling company.

Borders said it has received a commitment for $505 million in "debtor-in-possession financing" from GE Capital's Restructuring Finance division.

Borders said it will close its most under performing stores in the next several weeks, a decision based on "economic conditions, cost structures and vitality of locations."

The company said the remaining stores "will continue to run in normal course."