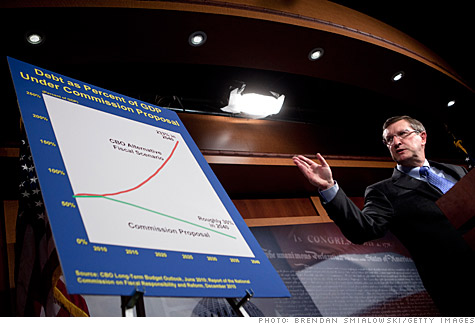 Senate Budget Chairman Kent Conrad, D-N.D., has been pushing for the White House and Congress to hold a summit to hammer out a debt-reduction deal soon. By Jeanne Sahadi, senior writerFebruary 16, 2011: 1:17 PM ET

"History will condemn us all if we don't do substantially more [to reduce debt] than is in this budget. I feel it puts at risk the economic security of this country," Conrad told White House budget director Jacob Lew at the end of a committee hearing on Tuesday.

Conrad liked some elements. He made clear that he likes how the president's budget would get annual deficits down to 3% of the economy by 2017, down from 10% today.

At that level, the nation's total debt level is considered "stable," provided the economy grows by at least 3% every year.

The problem, Conrad said, is that the president's budget would do nothing to bring gross debt down below 100% of GDP, above which it will be for the next decade.

Gross debt includes both Treasury bonds and money owed to government trust funds, such as those for Social Security and Medicare. As debt mounts above 90%, it impedes economic growth, according to some research.

Lew, under whom the country booked annual surpluses when he was President Clinton's budget director, knows very well the perils of too much debt and is respected for his fiscal acumen.

But he stressed during the hearing that the president's budget is intended as a down payment on debt reduction.

Indeed, both the president and Lew have said that they don't believe it would have moved the ball forward if Obama had actually included in his budget a hard-and-fast plan for comprehensive debt reduction, including Medicare and Social Security reform.

"If you look at the last 20, 30 years, sometimes putting out a proposal slows things down because it polarizes the sides as they dug in. We need to figure out a way to have a conversation that gets the parties talking together," Lew said. But, he added, "I can't give you a date or a time."

That answer did not sit well with Conrad.

Conrad, who sat on the president's bipartisan debt commission and has endorsed that group's proposals to reduce deficits by $4 trillion by 2021, has been calling for a fiscal summit to hammer out a long-term plan for debt reduction. He wants the summit to occur before Congress faces a vote to increase the country's legal debt limit, which likely will occur by May.

He's also mindful that the window for earnest negotiations will close quickly in the run-up to the 2012 presidential election.

"The administration has a big responsibility to help us understand their vision of how this process comes together. Sometime very soon there is going to have to be a negotiation that involves the leadership of the House and the Senate and the White House," Conrad said.

Meanwhile, there were a lot of references early this week to the prospect for closed-door negotiations. The president in a press conference said "we're going to be in discussions over the next several months." Senate Republican Leader Mitch McConnell said, " we all understand there are some limitations to negotiating significant agreement in public."

And former senator Alan Simpson, who co-chaired the president's debt commission, said on CNN Monday that when it comes to a debt-reduction deal, "they'll do it in a way that's unseen by the American public."