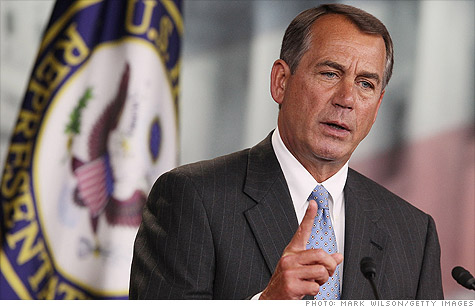 WASHINGTON (CNNMoney) -- House Republicans on Thursday continued on their mission to cut billions of dollars from the current year's budget.

He added that the House wouldn't pass a budget that doesn't cut spending, fueling new speculation of a possible government shutdown when current stop-gap funding measures run out March 4.

Republicans have vowed to cull $60 billion from the fiscal 2011 budget, in their first big opportunity to make good on campaign promises to rid Washington of mounting deficits and government spending.

Earlier Thursday, lawmakers took their scalpel to arts funding, slashing $20 million from the National Endowment for the Arts and $4.5 million from National Capital Arts and Cultural Affairs. They also voted to retain a big $390 million cut aimed at heating subsidies to poor households.

Republican lawmakers also agreed to cut funding to eight "czars," or top presidential or federal agency advisers who aren't confirmed by the Senate, including the pay czar charged with watching executive compensation at TARP-funded banks. And they also blocked an effort to blunt some $50 million in cuts to the Consumer Financial Protection Bureau.

Not everything gets the ax

However, for all the rhetoric, lawmakers are also voting to avert some major cuts. They agreed to restore funding that would keep some firefighters and police officers on the payroll through September, despite an $800 million tab for both.

On Thursday, lawmakers voted on amendments to protect $450 million slated for Amtrak train service, as well as another $200 million in financial help for struggling nations abroad.

However, on Thursday he backed off the tough love stance.

Late Wednesday, Democrats accused Republicans of killing jobs and hurting the economy. They cited a report by the left-leaning Economic Policy Institute, which gets funding from labor unions, that $60 billion in cuts would result in hundreds of thousands of jobs lost in both the public and private sectors.

Final House vote could be delayed

House leaders had wanted to pass the budget by Thursday, but the timing is now uncertain, as the process has taken more time than expected.

The Senate isn't expected to take up the measure until later this month. Then the chambers will likely have to negotiate the differences and come to a compromise.

The White House has vowed to veto the budget if it contains the deep cuts that House Republican are proposing.

Other deep cuts on the table would slash food subsidies for children of poor mothers, funding for early childhood development programs that help low-income children, and special education programs at schools.

Many amendments are aimed at undoing White House priorities, such as the Environmental Protection Agency's efforts to cut greenhouse gases. Late Wednesday, House Democrats largely abandoned efforts to save those programs, hoping that they'd have more success keeping environmental funding with negotiations with the Senate.