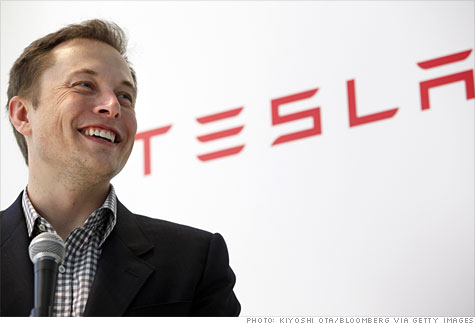 FORTUNE -- Tesla has built a great story around excellent technology. Now, it has to prove that it can build great cars, en masse.

It already built one, the Roadster, which it released in 2008. It's a slick, fast automobile, in line with Tesla's (TSLA) strategy to tap into a niche market-luxury electric vehicles. As of the beginning of this year, Tesla had sold 1,500 of them. Now, it needs to prove that it can sell great cars on a scale that will make the company profitable. That's going to be challenging, even though Tesla is mostly on track for the rollouts it outlined after it went public in 2010.

On Tuesday, Tesla issued a press release on its full year earnings, ahead of filing its first annual report as a publica company. Its losses grew -- Tesla reported a net loss of $51.4 million for the fourth quarter of 2010 compared to a loss of $24.2 million for the same time last year, when it was still a private company.

That pleased the market. Many analysts rated the company a hold or a buy, heartened by the fact that the company's revenue is up and that Tesla seems on track to launch its Model S sedan when it says it will, in the middle of 2012.

But the market may be overlooking some of the major challenges that Tesla could face in getting all the way home. Car production takes a tremendous amount of capital, notes Carter Driscoll, a senior alternative energy analyst with Capstone Investments.

Tesla has enough now, Driscoll says, much of it from the $465 million in low-interest government loans that the company received from the US Department of Energy back in June 2009. But going forward, Tesla will have less of a cash cushion than competitors. In the process of rolling out new cars, there are often speed bumps.

"They need to execute on this model perfectly to get Tesla on the radar screen," says Driscoll. "It's just so much harder than people recognize," for several reasons, one of which is that Tesla won't get volume purchasing discounts for the parts it doesn't manufacture.

Tesla plans to release 20,000 vehicles for the entire year in 2012, which isn't very many. "That's a good month at a suburban facility in Flint or in Lancing," Driscoll says.

And unlike the Detroit and foreign companies entering the EV market, Tesla will have some manufacturing disadvantages. The main one is lack of access to the kind of capital that huge auto manufacturers have on hand.

Those auto manufacturers are getting in on the EV market. GM's (GM) Chevy Volt and Nissan's Leaf are both scheduled to go online around the same time as the Tesla Model-S. GM and Nissan are power players in the automotive world, both with market caps around fifty billions dollars. Tesla, in comparison, was estimated to have a market around a couple billion when it went public.

"There's a segment of the population that wants to be green and wants to be in a very sexy car," says Driscoll. "It doesn't outweigh the tremendous amount of capital you have to put into one car. If that car doesn't succeed, even if that time frame gets delayed by a couple of quarters, you're talking a big shortfall in cash flow."

New models of cars get delayed all the time, especially with safety reviews, he says, and the electric vehicle market is particularly volatile.

It's difficult to predict consumer demand for EVs, especially since there are other forms of green cars out there for consumers, such as hybrid cars and plug-in electric vehicles.

Tesla's main strength has been stellar technology for electric car batteries and powertrains-the portion of the car that actually transfers energy from the engine and transmission to the wheels. Tesla's tech for these parts is some of the best in the business, according to Driscoll. Other car companies are accessing that technology too. For example, Telsa partnered with Toyota, the plan being for Tesla to develop the powertrain for Toyota's new Rav4 car.

The partnership is great for Tesla as a company, but carmakers such as Toyota that are capitalizing off of Tesla's battery tech are also pushing products that could potentially compete. For example, Toyota is still building another family of its hybrid car the Prius, set to hit the market between summer of 2011 and 2012. One of which is a Prius plug-in hybrid, which, unlike an electric car, doesn't require a special charging station. The plug-in hybrid and could tide Toyota over until the electric vehicle market becomes big enough to profit off of it.

Not that Tesla can't become profitable, it can, Driscoll says. But it's working with a tighter margin of error than competitors. If the demand for electric vehicles switches a bit, or if there are production delays, Tesla could get slammed.

"They're a long way away from profitability," says Driscoll. "Until they produce vehicle number one on a commercial scale, they're essentially a design shop."

The VC distribution system is broken