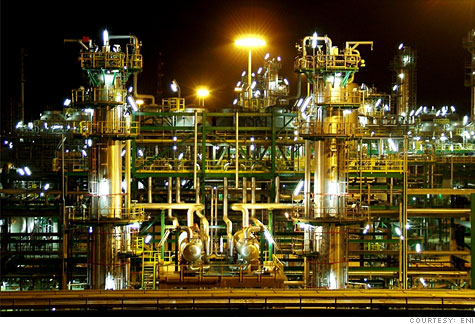 FORTUNE -- The instability in the Arab world claimed its first oil-rich victim over the weekend with the uprising in Libya. That's bad news for the bevy of international oil firms that have set up shop in the cloistered North African nation over the years, most notably Eni, the Italian oil giant. Libya has become a hot bed of energy investment since the lifting of trade sanctions seven years ago. Major oil companies from BP to ExxonMobil could now stand to lose millions, and in some cases, billions of dollars in investments and expected future revenue if the current regime falls.

Just a week ago it would have been unthinkable to suggest that Muammar Qaddafi could be ousted from power. The former army colonel, who seized power of the sparsely populated country in 1969 at the tender age of 27, had totally reshaped the country in his image. It would be impossible to mention the desert nation without some crack about its eccentric leader.

But suddenly over one weekend, Qaddafi seemed to lose his grip on power. Protesters set fire to government building and burned his likeness in effigy. The sheer speed of the uprising caught nearly everyone off guard. To put it in perspective, it took over a year of protests to oust the Shah of Iran in 1979. But in this new world of social media, revolutions seem to move at the speed of tweets.

Nevertheless, Qaddafi is determined to fight back, and unlike in Tunisia and Egypt, he seems to have no qualms in gunning down protesters en masse and even using fighter jets to bomb crowds. On Libyan state television yesterday, he showed his defiance, vowing to remain in the country "until the end."

It is still unclear what will come of this latest chapter of the "Jasmine Revolution." To say that Qaddafi's ouster is a done deal is a bit premature. He has survived direct attacks from the United States and years of crippling international sanctions. He has the support of tribal leaders in the country, who he has bribed for years using the country's oil wealth. The protesters have no leader and no organization. This uprising could fizzle out just as fast as it has exploded.

But if Qaddafi should fall, the fate of the country's vast oil wealth would be up in the air. Oil markets rallied significantly on the news this week and could move higher in the days to come. Most oil companies have evacuated non-essential personnel and have shut down some of their operations. Eni said last night that it has shut down its Greensteam natural gas pipeline, which supplies 10% of Italy's gas supplies (there is not expected to be any shortage of gas in the country due to backup reserves and alternative sources).

There have been reports of port closures and talk of Qaddafi blowing up oil installations to "punish" his enemies, but those reports remain largely unconfirmed. Eni said that none of its oil installations have been attacked and that only some were offline.

The mere chance that Libya, which exports 1.6 million barrels of oil a day (1.8% of world consumption), could fall into anarchy was enough to spook oil traders. But any short-term supply disruption could easily be filled by other OPEC members, like Saudi Arabia, which has 4 million barrels of spare capacity at its disposal. Nevertheless, Libya remains an important source of high-quality oil for Europe, which would be sorely missed if supply disruptions persist.

No one is more aware of how important Libya is to the world oil markets than Paolo Scaroni, the chief executive of the Italian oil giant Eni (E). The normally media-friendly chief executive has stayed mum on the situation and has taken a wait-and-see approach. Around 13% of Eni's total crude production, some 244,000 barrels of oil equivalent per day, comes from Libya, Eni officials tell Fortune.

The company entered Libya 10 years before Qaddafi came to power and has played a significant role in the country ever since. It was the only major Western oil company to remain in the country during the long UN trade embargo against Libya, which began in the early 1990s and ended in 2004.

Since then, dozens of international oil companies have been clamoring to get back into Libya. The country has several untapped oil and natural gas fields and has inked exploration and production deals with the likes of ExxonMobil, BP, Shell, France's Total (TOT) and Norway's Statoil.

But Eni was rewarded for its loyalty in 2007 when it entered into a massive 10-year $28 billion investment deal with Libya. The country also agreed to extend all existing oil and natural gas supply contracts through 2042 and 2047, respectively, with Qaddafi reportedly receiving a generous cut of the profit from those sales.

Oil production in Libya is now half of what it was before Qaddafi came into power in the 1960s. With today's new drilling and mapping technology, Libya could potentially become a much bigger player on the world energy stage.

The country's vast natural gas reserves are of primary importance to Shell (RDSA), which is upgrading a liquefied natural gas facility in the country to export large amounts of gas to the UK. It is also exploring for more natural gas around the country. In 2007, BP inked a

multiyear production contract with Libya worth at least $900 million. It will explore for oil and gas both onshore and offshore in an area larger than Kuwait. Total spending by BP (BP) in Libya could reach as much as $20 billion over the next two decades.

In 2008, ExxonMobil (XOM, Fortune 500) reentered the country, agreeing to invest $97 million to explore for oil and gas off the Libyan coast. It also paid a $72 million "signature bonus" to the state and agreed to pay $25 million to fund scholarship programs for Libyan citizens. The company is also expected to spend much more money in the country over the next decade.

Unfortunately for the oil companies, these massive deals would most likely become worthless pieces of paper if Qaddafi were to leave the country. Any regime that comes to power will undoubtedly want to renegotiate the contracts, which could see less profit for the oil companies. A new government could even fully nationalize the industry and kick all foreigner oil companies out forever, similar to what happened in Mexico in the 1930s.

But there is no doubt that Libya will continue to export oil and natural gas to the world. A small supply disruption should be expected if the regime falls, but whoever takes power will most likely make it a priority to get the wells pumping as fast as possible. Who will ultimately be pumping those wells remains in doubt.

Can the Saudis really ride to the rescue?

5 reasons to go the distance with Marathon Oil
Subscribe to Fortune
First Published: February 23, 2011: 10:26 AM ET