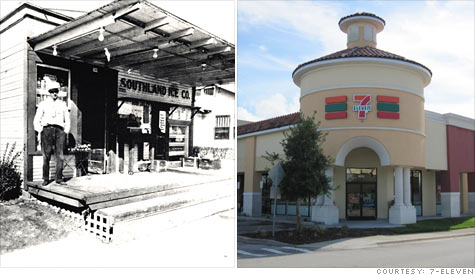 NEW YORK (CNNMoney) -- 7-Eleven is sending a clear message: We're not just Slurpees and cheap coffee anymore and we've taken over the world.

On Friday, the company became the retailer with the most number of stores worldwide and unveiled an array of new offerings.

The Dallas-based convenience store chain announced its global domination by opening its 40,000 store this week.

"This is a significant milestone," said Joe DePinto, CEO of 7-Eleven.

"We're opening a new store every three-and-a-half hours," he said, adding that the retailer isn't done yet.

"We're only in 16 countries," he said. "We're not in India or Brazil. So the opportunity to get even bigger is tremendous."

The company is credited with introducing Americans to the concept of immediate consumption.

"80% of what is bought in convenience stores is typically consumed in the first hour after purchase," said Jeff Lenard, vice president with the National Association of Convenience Stores.

7-Eleven's steady stream of customers looking for cheap and quick convenience has made the company more recession resistant than its peers, Lenard said.

And despite its much larger competitors, in terms of total sales, such as Wal-Mart (WMT, Fortune 500) and Target (TGT, Fortune 500), aggressively trying to encroach on its turf, Lenard said those chains don't provide the same service.

That makes 7-Eleven secure on its perch, for now.

7-Eleven franchises or licenses more than 8,800 stores in the United States and generates about $60 billion annually. That's not too shabby for a company that in 1927 started as a single store in Oak Cliff, Texas.

While its size is impressive, it can also be its biggest challenge.

DePinto said he's aware of those challenges but is focused on the opportunities that lie ahead.

This year, 7-Eleven is rolling out Etch-it Bud Light bottles that you can write your name on, new Slurpee flavors and a service that allows customers without credit cards or a bank account to shop online and pay their bills in cash.

The company rolls out hundreds of new products every year. Some, like the Slurpee, were clear hits, others, like the P'Eatzza sandwich which was made infamous on a reality show, didn't take off.

DePinto says 7-Eleven strives to be a part of the community.

"We are proud of the jobs and business opportunities that we bring into a local economy," he said, adding that between 15,000 to 20,000 new jobs are created in the U.S. each year through its store growth.

"This store growth is a job-stimulus package in itself," DePinto said.

Wal-Mart lost shoppers during the holidays