IPad 2: Thinner, faster, and with a Steve Jobs surprise 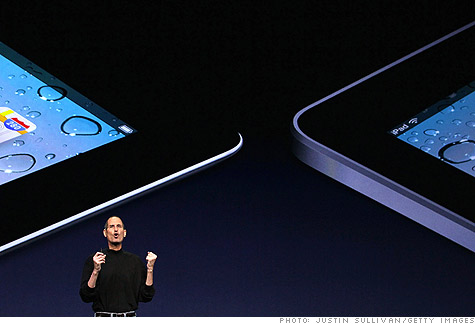 NEW YORK (CNNMoney) -- Apple CEO Steve Jobs made a surprise appearance at a company event in San Francisco on Wednesday to present the second generation of the iPad tablet.

The iPad 2 received a new, thinner design and an updated "A5" dual-core microprocessor. Jobs said the iPad 2 is 33% thinner than the original, and the A5 chip will make the iPad 2 twice as fast.

As expected, the iPad 2 will feature front- and rear-facing cameras and will be capable of FaceTime video chatting -- a feature that debuted last year on the iPhone 4.

Apple said the new tablet will ship on March 11. It will be available in both black and white versions.

Other features include 10-hour battery life (the same as the original), a $39 optional port add-on for HDMI video, and an optional $39 magnetic case that automatically puts the iPad 2 to sleep when it is covered.

The iPad 2 will also be the first device to run iOS 4.3, the latest update to Apple's iPad, iPhone and iPod Touch operating system. IOS 4.3 features faster browser performance plus iTunes sharing over Wi-Fi, and allows the iPad to become a mobile hotspot for an iPhone 4.

The original iPad, the iPhone and latest two versions of the iPod Touch will also get updates to iOS 4.3 on March 11, though the Verizon iPhone 4 will not. Apple did not give a timeline for when the Verizon iPhone would get its update -- if at all.

Wednesday's event was critical for Apple, as the company is becoming increasingly reliant on the revenue it generates from iPad sales.

In 2010, Apple sold nearly 15 million iPads, which contributed $9.6 billion in revenue -- 12.5% of Apple's overall sales. That surpassed iPods and iMacs in net revenue. Not too shabby for a device that Apple started selling in April.

Shares of Apple (AAPL, Fortune 500) rose about $4 after Jobs appeared on stage.

The CEO has been on a medical leave of absence, his third in seven years, and he was not expected to appear at Wednesday's event. Jobs was noticeably thinner at the iPad 2 presentation than he has been in past events -- he added a belt to his traditional black turtleneck and jeans outfit.

Jobs did not present at the unveiling of the iPhone 3GS, deferring to Phil Schiller, Apple's marketing head.

Why aren't there cheaper tablets?