GPS systems that save gas 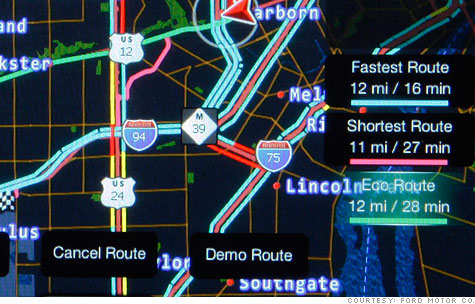 Instead of just getting you where you're going, some in-car navigation systems can get you there more efficiently. By Peter Valdes-Dapena, senior writerMarch 4, 2011: 3:18 PM ET
Follow Peter on Twitter: @PeterDrives

NEW YORK (CNNMoney) -- Ordinarily, you want a GPS navigation system to show you the quickest way to get where you're going. But with gas prices over $4 a gallon in some cities you might rather know the way that uses the least gasoline.

Some new navigation systems can now do that.

But if you're in a rush you should know this: Sometimes using less gas might take a little longer.

While ordinary GPS routing relies on data like the expected average speed on various roads, "Green Routing" or "Eco-Routing" adds in other factors, said Mark Burfeind, a spokesman for TeleNav, a digital mapping company that supplies an "Eco-Route" system used in some Ford Motor Co. vehicles.

Among the factors Ford's "Eco-Route" system looks at:

Of course, many GPS systems already take traffic into account, but it's given greater importance when calculating an "Eco-Route." There may be cases in which driving through a traffic jam would be quicker because it's more direct, but driving around it would actually use less fuel.

Also, slower roads can be more fuel efficient. Once a car is going fast enough to use its highest gear, every mile per hour faster reduces fuel economy. So driving on a 50 mile per hour road, provided its straight and without stop lights, might be be preferable to a 65 mph rural freeway.

Compared to using the "fastest" route, Ford says its researchers found that using the "Eco-Route" option offered as much as 15% reduced fuel use in some of their vehicles. Map data company NavTeq, creator of a similar system that will be used by Hyundai in Europe, estimates a more modest 6% improvement.