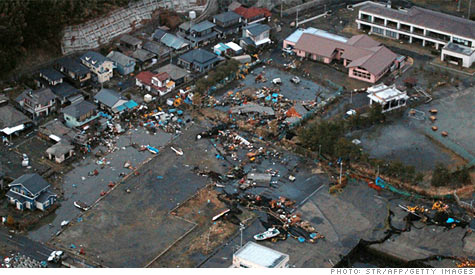 After a devastating earthquake rocked Japan, spawning a deadly tsunami (above, an aerial view of debris in Hitachinaka), many people want to give to relief efforts. By Jessica Dickler, staff writerMarch 12, 2011: 9:29 AM ET

NEW YORK (CNNMoney) -- After the fifth largest earthquake in history struck Japan, many Americans have been eager to help -- but donations can be tricky, particularly in the earliest phase of the recovery effort.

Despite the massive destruction seen in Tokyo and the surrounding area, "at this stage it's very difficult to say the extent of the need," said Andrea Koppel, a spokeswoman from the American Red Cross.

Ways to donate
To make a $10 donation now to:

Daniel Borochoff, president of the American Institute of Philanthropy, advises those ready to make donations to "wait and see how the situation develops and step forward when clear charitable needs arise."

An immediate response is not necessarily best, he says. "It's ok to get assessments on the situation and then send contributions."

For those who intend to help victims of Friday's 8.9-magnitude quake, experts advise following these guidelines in the days ahead:

Who to give to

Patrick Rooney, executive director of the Center on Philanthropy at Indiana University, recommends giving to reputable aid organizations, like the Red Cross and Save the Children, because those organizations already have a presence in the impacted area and their response will likely be faster and more efficient than other organizations that are not on the ground.

"They have the experience and infrastructure necessary to provide help," he said.

The Japanese Red Cross has already deployed 900 rescue workers to the affected region today and the American Red Cross has emergency responders on standby, Koppel added.

"Give money, not food, water and clothes," Rooney advised. "There's a much higher shipping cost for supplies and it's easier for disaster organizations to get cash and use it as they need to."

In addition, it can be difficult to determine what supplies will be most needed, particularly in the early stages of a recovery effort, and in the case of Japan, there are many supplies already on hand.

Currently, a Red Cross warehouse in Malaysia is fully stocked with enough relief supplies to aid 5,000 families, according to Koppel.

Unfortunately, an influx of websites that are not legitimate often crop up in the wake of natural disasters, soliciting for charitable donations to aid victims.

"I guarantee websites pop up in the next 24 hours that are likely to be fraudulent," Rooney said.

The Federal Bureau of Investigation advises donors not to respond to any unsolicited incoming emails, but rather go directly to recognized charities and aid organization's websites, as opposed to following a link to another site.

Before donating, also verify the legitimacy of the nonprofit organizations as well as its nonprofit status.

And be leery of emails claiming to show pictures of the disaster areas in attached files, because those files can contain viruses, the FBI cautioned.

Charity solicitations that seem suspicious can be reported to the National Center for Disaster Fraud; complaints can also be filed with the Internet Crime Complaint Center.