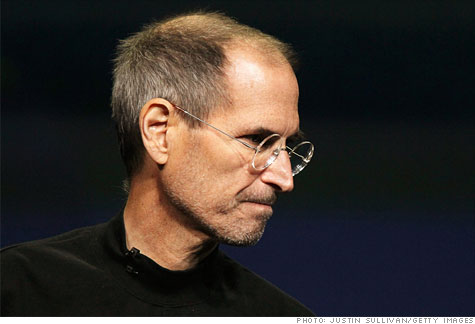 FORTUNE -- What separates the Steve Jobses and Walt Disneys of the world from the rest of us? And can you become one? Erik Calonius poses these questions in his forthcoming book, Ten Steps Ahead. In the following excerpt, Calonius describes how visionary ideas come to life.

The visionary is a pattern hunter. And as the patterns begin to take shape, the visionary paces the hall anxiously, staring out the window. The cognitive dissonance builds between what is and what will be. The visionary's sense of discomfort grows. 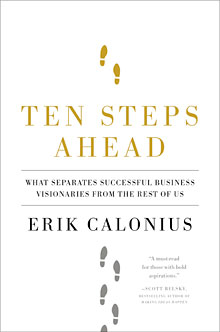 At some point when the thinker, exhausted, has stopped concentrating on the problem at hand, the brain slips into that single-mind immersion that Hungarian psychologist Mihaly Csikszentmihalyi famously termed the state of "flow." Whereas we spend most of our lives thinking about the past and the future, the flow puts us into that narrow shaft of time called the present. It's a place the brain doesn't take us to very often.

MRIs show that, in the state of flow, the brain is quieting down. The flickering of activity recedes into weak flashes of color. The thinker, at this point, is probably aware of nothing at all. Whether it is intuition, or visualization, or the dawning of an awakening that draws the visionary near, at last the time of inspiration arrives. This is the famous Eureka! moment.

Steve Jobs "stood back": "You can't really predict what will happen," he said. "But you can feel the direction you're going. And that's about as close as you can get. Then you just stand back and get out of the way, and these things take on a life of their own."

John Lennon just took a nap: "I'd spent five hours that morning trying to write a song that was meaningful and good. I was just sitting, trying to think, and I thought of myself sitting there doing nothing and going nowhere. Once I'd thought of that, it was easy; it all came out. No, I remember now, I'd actually stopped trying to think of something. Nothing would come. I was cheesed off and went for a lie down, having given up. Then I thought of myself as nowhere man, sitting in this nowhere land. 'Nowhere Man' came, words and music, the whole damn thing. The same with 'In My Life.' I'd struggled for days and hours, trying to write clever lyrics. Then I gave up, and 'In My Life' came to me. Letting it go is the whole game."

Einstein closed his eyes and let his fingers wander over the piano keys. Then he jumped up. "There, now I've got it!" his sister Maja remembers him exclaiming as he hurried off into his study.

That moment when the new pattern snaps into place has been described many ways: like scales falling from the eyes, like a flash of lightning, like molecules of water bouncing randomly around and, upon reaching a freezing temperature, snapping instantly into rigid lines. Something new comes across your consciousness. It "dawns" on you. Says physicist Carlo Rubbia, "It's an irrational and an instinctive moment in which something clicks in your mind and you say, 'Why don't we do this -- I mean, why not?'"

The snapping of fingers perfectly describes the moment of inspiration (and makes you wonder if the opposable thumb was actually made for this purpose). For it is two opposing forces -- what is and what should be -- that are being resolved.

It is surprising how something as portentous as an epiphany resembles the punch line of a joke: "Does your dog bite?" Inspector Clouseau of The Pink Panther fame asks the hotel clerk as he sees a dog at his feet. "No," the clerk responds. Clouseau bends over to pet the dog and has his sleeve ripped off. "I thought you said your dog doesn't bite!" he remarks angrily. Replies the clerk, "That's not my dog."

We laugh at such jokes because the pattern change is unexpected. It comes out of the blue. "The punch line," according to Horace Judson, former professor of the history of science at Johns Hopkins University, "tells us that a set of things that we thought belonged to one pattern was really, all along, making another pattern."

Incredible as it seems, the brain's search for a resolution to dissonance is exactly what you might hear in a comedy club: When the U.S. Postal Service can't deliver the mail overnight, we get... (laughter growing) FedEx (FDX, Fortune 500)! When the Internet has billions of pages of text that are impossible to search, we get (chortles and applause) Google (GOOG, Fortune 500)! When we can't get a good cup of brewed coffee, we get (drum roll and rim shot) Starbucks (SBUX, Fortune 500)!

The counterintuitive thought in all of this is that for an idea to really be radical, it has to be in some way ridiculous. "First of all you have to take it as a joke," explains Carlo Rubbia. "Any fundamental advances in our field are made by looking at it with the smile of a child who plays a game."

Science writer Isaac Asimov said, "The most exciting phrase to hear in science, the one that heralds the most discoveries, is not Eureka! (I found it!) but, 'That's funny...'" That phenomenon was also noticed by Lewis Thomas, the former dean of medicine at Yale and president of Memorial Sloan-Kettering Institute. "It seems to me that whenever I have been around a laboratory at a time when something very interesting has happened, it has at first seemed to be quite funny," he recalled. "There's laughter connected with the surprise -- it does look funny. And whenever you hear laughter and somebody saying, 'But that's preposterous!' -- you can tell that things are going well and that something probably worth looking at has begun to happen in the lab."

Indeed, this is the secret of visionary ideas: Most earthshaking ideas look funny at first. They are not sensible. Think of the jokes that have been pulled: Jobs introducing the iMac -- without a floppy disk! Branson, with no experience in it, starting an international airline. Disney (DIS, Fortune 500), at the depth of the Great Depression, proposing a full-length feature cartoon. "You have to have confidence in nonsense," says airplane designer Burt Rutan, whose aircraft have circled the globe on a single tank of gas, and have climbed to the edge of space as well.

"We build toys," said Nassim Taleb. "Some of those toys change the world."

And now comes the hardest part of the visionary's quest: selling those silly ideas to a skeptical world.

How Steve Jobs gets things done

Sometimes it's good to be a sellout