How to get to $1 million

How to become a millionaire in 3 easy steps 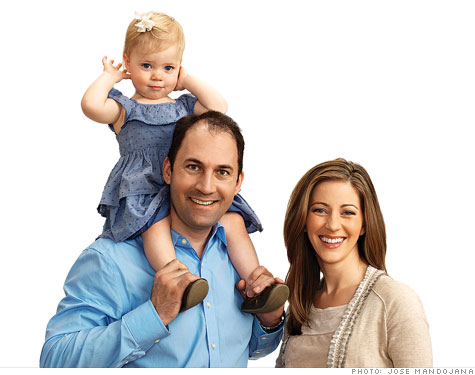 (MONEY Magazine) -- Remember that old Steve Martin joke about the secret formula for becoming a millionaire?

Okay, getting the odometer on your investment portfolio to click over into seven digits isn't quite that easy. Only 7% of American households ever manage it, according to research firm Spectrem Group -- though it's certainly not for lack of desire.

While $1 million may not be worth what it was back when Martin was a wild and crazy guy in the late '70s, achieving that iconic number still has profound allure. It means that you're ahead of the game. You're assured a baseline retirement security. You've arrived.

Martin may have oversimplified, but the reality is that getting your portfolio to the $1 million mark is not nearly as difficult as you may think, even if you've managed to put away only a fraction of that amount so far. You just have to understand how to operate the three basic levers of wealth building: how much time you have to work with, how much you save, and how you invest that savings.

Who are these millionaires?

The slightest tug on one or two of these levers can dramatically affect your path to $1 million. Use our calculator to pinpoint when you're likely to become a millionaire based on your current situation and investing returns.

Lever 1: How Much Time You Allow

When you think about getting rich, what jumps to mind? Saving more money? Getting that money to work harder for you? Sure, those are critical elements. But they're not nearly as important as time: How long you allow dictates how you pull the other two levers -- which is why you want to estimate your schedule before going on to the next sections.

Sometimes you can't play with the time lever -- your kids will go to college when your kids go to college. But in certain cases, it's possible to control the clock.

But if you delayed retirement by just two years, you'd hit the mark. As Chris Dardaman, head of Brightworth, a financial planning firm in Atlanta, says: "It's not the end of the world if you can't save as much or invest as well as you want -- as long as you save and invest longer."

In part, how long it'll take to become a millionaire depends on where you are now. If you already have $500,000 saved, it might take only 10 to 15 years, in inflation-adjusted terms, provided you sock away $10,000 to $15,000 a year and your investments outpace inflation modestly.

But even if you're only a tenth of the way there -- like the typical worker who's been investing in a 401(k) for 10 to 20 years, according to the Employee Benefit Research Institute -- you can make it in two decades or less, if you save a good chunk of income or earn a decent return.

Of course, that's the dilemma. While the ability to save more is within your control, the ability to generate a certain return isn't 100% in your hands. And as your time horizon shrinks, so too will your ability to accurately predict how your investments are likely to perform. So let time determine which of the two other levers -- savings or investing- -- you pull harder.

If you want to get to seven figures in 10 years or less: Seriously ramp up savings

With only a few years to invest, there's a significant risk that even a seemingly safe investment strategy could fall short of your expectations, because of the wide range of possible outcomes.

For example, according to computer models run by Ibbotson Associates, a moderate 60% stock/40% bond strategy could result in annualized returns of as much as 16% over the next 10 years, but it could also result in worst-case losses of nearly 1% a year. While that gain would certainly speed things up, a sustained loss -- even a modest one -- could be devastating given your time frame.

So if your self-imposed deadline for achieving $1 million (or any financial goal) is tight, instead of banking on optimistic returns, you're better off trying to boost your savings as much as possible. Then invest in a balanced mix of 50% stocks and 50% bonds that can be expected to beat inflation by a modest two or three percentage points a year.

If you're willing to wait more than ten years: Invest more aggressively

The longer you have to invest, the greater chance you give the market to smooth out any ups and downs. Back to that 60%/40% portfolio: Over 20 years, the annualized spread could narrow to gains between 2% and 14%. So you could even take on a little more risk -- increasing your equity exposure, say -- for the possibility of better returns.

The single most important thing you need to know about building wealth: You're far better off being a dogged saver who's a mediocre investor than being a below-average saver who can knock the socks off the S&P 500.

NEXT: Lever 2: How much you save