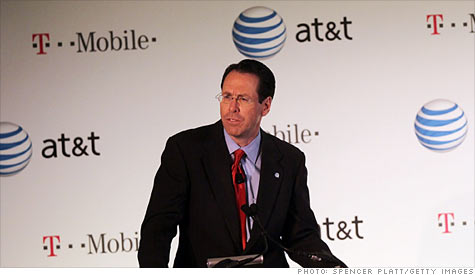 NEW YORK (CNNMoney) -- If you're skeptical about AT&T's claims that its purchase of T-Mobile will benefit consumers, you're not alone.

Analysts at an AT&T presentation on Monday asked pointed questions about exactly how the company plans to integrate T-Mobile in a way that keeps the wireless industry competitive.

The answers from AT&T executives were simple and clear-cut: There is "vibrant and increasing" competition in the industry, and wireless prices tend to fall when the field consolidates.

The merger faces a tough regulatory hurdle, but AT&T (T, Fortune 500) says the facts support approval of the deal.

Let's take a closer look at the facts.

"The wireless space is competitive." AT&T made the case that it operates in a "fiercely competitive" industry, and lofted praise at its competition for the work that they have done to build up a highly contested landscape. Customers in 18 of the top 20 U.S. markets would have at least four carriers to choose from even after the deal is completed, company officials pointed out.

Still, customers aren't exactly flocking to that "competition" in droves. After the proposed merger is completed, AT&T and Verizon (VZ, Fortune 500) would control 70.1% of the U.S. market, according to eMarketer (or 80%, according to Sprint).

The benefits of having a plan with a national carrier include better nationwide coverage and fewer roaming areas. Regional carriers have also complained that bigger competitors like AT&T use their size to leverage deals with handset manufacturers for exclusive rights to sell the best phones.

Case in point: AT&T and Verizon have the iPhone. Regional carriers don't.

"Every time there's a giant merger, the acquirer seeking regulatory approval points to marginal players, saying it's a competitive category," said Adam Hanft, CEO of Hanft Projects, a branding firm that worked with telecom companies, including AT&T Wireless. "For all intents and purposes, it's a two-horse race."

Wireless analysts noted that even if regional carriers consolidate, many industries thrive with three competitors. But the third largest carrier, Sprint (S, Fortune 500), isn't exactly thriving, and many expect that the company would need a partner to survive in a world dominated even more heavily by its two bigger brothers.

It's true that the cost of voice services has fallen over the past decade, and even in the past year: Sprint and T-Mobile both offered attractive rates, so Verizon and AT&T slashed the prices of their unlimited calling plans by $30 in early 2010.

But what that doesn't show is how much people are actually spending on their cell phone bills. For AT&T customers under contract, spending has gone up over the past four years. AT&T's average revenue per user for postpaid customers has increased by about 3% in each of the past several years as data services have driven up users' spending.

That's because customers with contracts are buying more smartphones and tablets. AT&T's revenue from accompanying data services is up a whopping 19.3% per user in 2010 and 23.7% in 2009.

Customers are undeniably getting more for their money than they were in the past. Tablets and smartphones are a big leap forward, and it's reasonable for customers to pay extra as their new gadgets suck up additional bandwidth.

But as data traffic increases, customers keep paying more for the data that they consume. AT&T's data plans are competitive with its rivals, but several of them offer unlimited plans. AT&T doesn't. It has put caps in place that slap heavy overage charges on additional usage.

Plus, wireless carriers are quietly hiking the prices customers pay for their mobile phone service. Three of the four major networks raised their rates or scrapped discount deals earlier this year.

AT&T claims that the cost per bit will come down as a result of its T-Mobile deal, but analysts are skeptical of that.

"This deal won't make prices come down, and I'd be surprised if it made an impact on pricing at all," said Philip Redman, analyst at Gartner.

The deal would also, very conveniently, knock T-Mobile out of the picture -- eliminating a carrier that has historically offered some of the cheapest available national wireless plans.

AT&T-Mobile: Merger brings efficiencies, but will consumers see the benefit?

AT&T-Mobile and Verizon: Is Sprint third place in a two-man race?