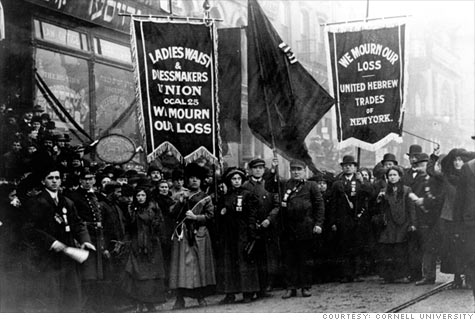 NEW YORK (CNN) -- As labor unions battle to retain collective bargaining rights in Wisconsin, Ohio and other states, they are marking the centennial of a tragic factory fire that started the movement that first won those rights.

A scene of surreal horror engulfed the Triangle Shirtwaist Factory in Manhattan 100 years ago on March 25, 1911 during a disaster that ultimately would lead to better and safer conditions for all working people in the United States.

It was a Saturday afternoon, 4:40 p.m., shortly before closing time. About 500 young, low-paid immigrant garment workers, who labored six-days-a-week, were crammed by their sewing machines and cutting boards, busy creating the popular women's blouses that buttoned down to the waist, known then as shirtwaists.

The exact cause was never pinpointed but historians believe someone dropped either a cigarette or a match. With piles of fabric strewn through the factory floor flames swept through the 8th floor, then to the 9th and 10th floors of the Asch building, what was then considered a modern high-rise structure.

Panic reigned as the inferno spread, plumes of smoke rising skyward. A crush of workers attempted to cram down a narrow stairwell, others ran for the elevator. Survivors would later testify doors to a second stairwell were locked. Scores were trapped near the windows.

Triangle's workers were confronted with a horrifying instant decision -- burn to death or jump. Some didn't even get that choice; they were already on fire when they leaped.

A growing crowd outside watched in disbelief, including United Press correspondent William Shepherd.

"I learned a new sound -- a more horrible sound than description can picture. It was the thud of a speeding, living body on a stone sidewalk," Shepherd wrote. "Up in the [ninth] floor girls were burning to death before our very eyes. They were jammed in the windows.

"Down came the bodies in a shower, burning, smoking-flaming bodies, with disheveled hair trailing upward."

Hook and ladder company 20 rushed the fire department's tallest ladder to the scene where firefighters cranked it to its maximum length. But it was not high enough; the ladder reached only to the 6th floor. Some women leaped towards it only to drop to the hard concrete.

Shepherd reported 62 people jumped to their deaths. Another 50 burned bodies were found on the 9th floor. In all 146 Triangle workers, mostly young, immigrant women -- many just teenagers -- were killed.

One of those who leapt to her death was 19-year old Rose Oringer, who had emigrated from a small town in what is now Ukraine. She earned $10-a-week and was engaged to be married, according to her descendants.

"It's so, so sad to know that she and 145 others like her died that way. It's so horrible," laments Leigh Benin, co-author of "The New York City Triangle Factory Fire," whose grandmother was Rose's first cousin.

In the aftermath of the fire New York was consumed by grief.

Labor advocates were outraged that inadequate workplace and fire safety rules had allowed such a hazard, especially since Triangle workers had struck 16 months earlier demanding better pay and work rules.

"The death toll is astonishing and the horror of watching these people die that way just shocked the City," said Michael Hirsch, co-producer of the HBO documentary, "Triangle: Remembering The Fire."

"It touched at the souls of people. It created not just sympathy but anger and disapproval that bosses had the right to treat workers that way," said Bruce Raynor, president of Workers United, the union that traces its origin to the now-defunct International Ladies Garment Workers Union.

In response to the tragedy at Triangle, New York City established a Board of Fire Prevention which required structures to have fire alarms, extinguishers and hoses and banned smoking in factories.

"This shocking loss of life aroused the community to a full sense of its responsibility. A superficial examination revealed conditions in factories and manufacturing establishments that constituted a daily menace to the lives of the thousands of working men, women and children."

The Commission would write 36 bills that strengthened New York's workplace labor laws and would serve as a model for other states. When Wagner became a U.S. Senator he pushed through the National Labor Relations Act, known as the Wagner Act, which gave workers the right to form unions and bargain collectively with their employers.

"The Triangle Fire gave birth to the movement we now think of as the New Deal," said Richard Greenwald, dean of the Casperson School of Graduate Studies at Drew University.

Descendants of the Triangle victims, who take solace in the labor reform laws that were approved after the fire, fear the legacy of their ancestors may be lost. Even though workplace safety is not an issue in today's disputes.

"I can't go back and save Rose Oringer. I can't rescue her or bring her back to life. The only kind of redemption for the sacrifice of those 146 lives is that from that tragedy workplace safety and labor reform laws were passed," said Leigh Benin, who is worried about what he believes is an attack on unions in Wisconsin and Ohio. "From my emotional point of view it means the kind of historical redemption that resulted from the fire will be erased so they will have died in vain if that is taken away."