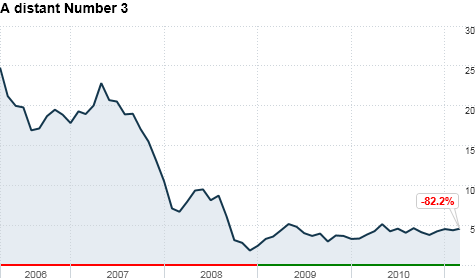 FORTUNE -- When news broke of AT&T's proposed mega-deal with T-Mobile earlier this week, investors sold Sprint stock as fast as they could get it off their hands. Shares of the country's third-largest wireless carrier dropped 13% as pundits foretold a future in which bigger carriers would batter Sprint more than they already have.

But a few analysts and investors are rejecting the conventional wisdom that Sprint (S, Fortune 500) stock is a big loser here. An AT&T/T-Mobile combination, they say, would reduce the number of major U.S. carriers to three from the current four, thereby reducing competition for everyone including Sprint. And a lengthy anti-trust review process could distract T-Mobile executives for more than a year, boosting Sprint's prospects in the process.

"I think this deal is a positive for Sprint despite the market reaction," says Dan Martino, manager of the $2 billion T. Rowe Price Media & Telecommunications Fund (PRMTX), which has returned 13% annually over the past decade to beat 99% of its rivals, according to Morningstar. He bought an additional 1.2 million Sprint shares last quarter and wasn't part of the selling wave earlier this week.

T-Mobile, the fourth-largest U.S. wireless carrier, scraps with Sprint for "value customers" who typically spend 20% less on their plans than AT&T (T, Fortune 500) or Verizon (VZ, Fortune 500). If a Department of Justice approval process distracts T-Mobile's management, Martino says Sprint can poach potential customers. Furthermore, any increased competition Sprint faces from a stronger AT&T will be more than offset by higher prices consumers will pay across the industry after T-Mobile is gobbled up.

Underpinning Martino's bullish bet is his belief that Sprint's long-term turnaround prospects, at long last, are shaping up. "If you're patient, I think you'll make a lot of money on Sprint," he says.

The company started this year hot. It added 519,000 long-term subscribers in the fourth quarter, more than even AT&T -- the first time that's happened in least five years, according to Morningstar. A years-long turnaround effort led by CEO Dan Hesse has improved customer service and Sprint's notoriously bad call quality. Martino expects those efforts to drive down Sprint's churn-rate -- industry jargon for losing customers. Sprint finished 2010 with a churn rate of around 1.85% for long-term subscribers, down from an egregious 2.5% just two years ago (Verizon and AT&T both keep churn below 1%). "Churn is like a big ship," Martino says. "It's difficult to turn around, but once you get it moving in the right direction it continues moving in that direction."

As part of the turnaround, Hesse still has to fix Sprint's biggest mistake: buying Nextel. The disastrous $36 billion acquisition in 2005 is considered one of the decade's worst. Sprint wrote down the value of Nextel just three years later to $6 billion and is still in the process of closing Nextel's iDen network and merging those subscribers into its chief network. Analysts estimate savings of around $2-billion a year when it's completed in 2015.

Combined, analysts expect the efforts to boost Sprint's profit margins to 25% in two years from 17%-18% today. Apply those margins to a company that can earn $8 billion in 2013, Martino says, and in two years he predicts Sprint stock will trade at $9.

None of this suggests that Sprint will be a robust competitor to AT&T or Verizon Wireless. The giants post profit margins near 40% and earn more in one quarter than Sprint does in a year. Scale is a huge advantage in the wireless business -- it allows AT&T and Verizon to outspend Sprint in marketing, network upgrades, and phone deals.

But for Sprint investors that may not matter. Analysts like Todd Rethemeier of Hudson Square Research think the stock will jump even as Sprint becomes a more distant No. 3.

"We have no doubt that with only 16% market share, Sprint will never have the same margins as AT&T and Verizon," he wrote in a March 21 report. But Rethemeier goes on to say that Sprint doesn't have to post those same high margins. "It just needs to have higher margins than it has today," he says. "Many will argue that Sprint will be marginalized as the number three player. We are not so sure that this will happen."

Hedge fund manager David Einhorn's recent Sprint buying is another vote of confidence in the stock. Einhorn's Greenlight Capital usually holds more long positions than shorts, contrary to most of the press it gets. And Greenlight's 21.5% annualized gains since it opened in 1996 attest to Einhorn's stock picking prowess.

In a CNBC interview and a letter to Greenlight's investors, Einhorn, who declined an interview request for this story, highlighted the progress in Sprint's turnaround efforts and its huge spectrum position as reasons for his bullishness. Spectrum is becoming a scarce resource for carriers as more consumers use data-hogging phones and devices that consume more bandwidth, especially in crowded urban areas. The more spectrum you have, the more data you can handle. And Sprint has more than three times the spectrum for 4G than Verizon or AT&T, which Einhorn says could be a huge advantage going forward. Already AT&T charges separate rates for data usage; Sprint's plans don't have a limit. Greenlight values Sprint shares at $10.

It hardly needs saying, but buying a beaten-up stock like Sprint can be risky business. Morningstar analyst Stephen Ellis describes the potential perils: The savings from Sprint's network fixes won't hit the bottom line for a couple years -- and even then they could be less than forecast; the company could still lose customers if it doesn't have popular phones; and Verizon and AT&T could erase Sprint's spectrum advantage by spending huge amounts of capital at questionable returns to beef up their networks.

Investors betting that Sprint will look better in a few years are staring at outsized rewards. Now the question is whether Sprint can deliver.

How JPMorgan landed the AT&T deal

Can I get out of my T-mobile contract?