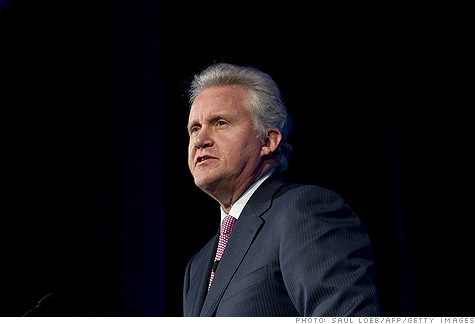 WASHINGTON (CNNMoney) -- The chief of General Electric (GE, Fortune 500) on Thursday defended the conglomerate's zero tax rate in 2010, and called for reform of the U.S. tax code.

In his first public speaking engagement since a barrage of criticism about not having to pay taxes in 2010, GE chief executive Jeff Immelt told the Economic Club in Washington that his company did nothing wrong.

"At GE, we do like to keep our tax rate low, but we do it in a compliant way, and there are no exceptions," Immelt said. "Our tax rate will be much higher in 2011 as GE Capital recovers."

But Immelt added that he, along with many other corporate leaders, wants the federal government to reform the U.S. tax code, which he called "old, complex and uncompetitive."

Immelt also pointed out that over the past five years GE has paid $14 billion in taxes. He said that even though GE made money in 2010, "we didn't make a lot of that in the U.S."

The company is particularly in the spotlight because Immelt also serves as the chief of President Obama's innovation and jobs council. When asked what he thought of criticism that GE isn't a good role model and shouldn't be leading the jobs council, Immelt said he was committed to helping the president build jobs.

"I'm completely committed to doing this job and working with the president and building jobs in the U.S.," Immelt said.

Later, in an interview with the media after his speech, when asked what GE was doing to help job growth, he said the company expects to have hired 16,000 new employees this year and last year, mostly in manufacturing and high tech services industries.

Immelt said he understands why his company is taking heat in the media.

"I don't fault this type of reporting," Immelt said. "It is what it is. You can't do any job like this unless you have a thick skin."