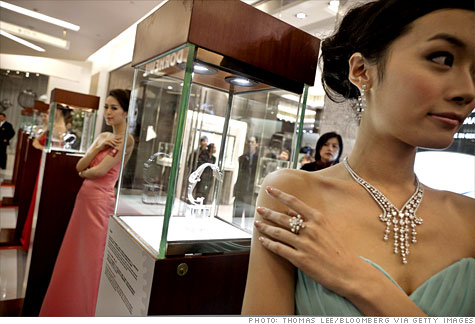 In Beijing, it's okay to flaunt your luxury, but just don't advertise it. By Katherine Ryder, contributorApril 5, 2011: 1:23 PM ET

FORTUNE -- Starting next week, mum's the word on luxury in Beijing.

After April 15, any company that puts up a public advertisement in China's capital city using the adjective -- or a few other flowery phrases like it -- will be fined around $4,500. The municipal government says on its website that such words induce hedonism and spiritual emptiness. The state media cites the growing gap between the rich and the poor.

The crackdown may seem odd, both at face value and because it appears to contradict both Chinese culture and existing government policy. After all, China is known for its brand-loving shoppers. And the country's government is in the midst of a push specifically aimed at getting citizens to consume more.

But this latest move by the government doesn't mean it wants to backtrack on consumerism. While the initial announcement of the regulation kicked up a fuss, analysts of the luxury goods industry say the new law is mostly meaningless. It may hurt the local swindler peddling "luxury Swiss apartments" and "royal French wine" -- indeed, suppressing false advertising is likely the government's core aim -- but the regulation is irrelevant for major luxury goods companies. High-end retailers don't normally advertise on billboards.

"What they've done is pretty marginal," says Aaron Fischer of CSLA, a broker. "If they really want to send a message, they'll change the duties."

Although China is only the fourth-largest consumer of luxury goods by region, its growth forecasts are heady. A recent CLSA report, authored by Fischer, predicts that Chinese consumers will spend more on luxury goods than consumers in any other country by 2020, accounting for 44% of global luxury sales. Japan, which holds the current "biggest spender" title, accounts for only 24% of global luxury sales.

No one seems to doubt this growth potential. Despite China's aging population, the average Chinese millionaire is only 39, 15 years younger than the average millionaire in Japan, Europe, and North America. Luxury goods are an essential part of business culture in China. A gift with a Gucci label builds guanxi, or relationships, and is considered more tasteful than an envelope of money. Carrying a Chanel bag suggests you have a fat wallet inside, which is the ultimate status symbol.

How does Beijing view this trend? For anyone trying to crack this analysis, the country's luxury tax hit list -- the products affected by the country's sweeping combination of import, value-added, and luxury goods taxes -- is a good place to start. While the Chinese government does seem attuned to income disparity, it also has bills to pay. But because luxury goods are taxed up to 30% on the Mainland, only one in two Chinese consumers do their shopping at home -- translating to billions in lost tax revenues for the government.

The question, then, is what will happen if the tax changes. It's not a matter of spending less, but where Chinese consumers will spend. Right now, many high-end Chinese shoppers travel to Paris, London, Hong Kong, and Macau. Major department stores in London and Paris now have Mandarin-speaking staff, and more luxury hotels will be opened or refurbished this year in Paris than at any other time in the city's history. Erwan Rambourg, an analyst at HSBC, estimates that 75% of Hong Kong's watch market is driven by Mainlanders.

The Chinese-language media has given attention the issue lately. Wang Jianlin, a billionaire property tycoon, recently complained to Beijing News that, "Chinese people sit on airplanes to deliver jobs and tax money to foreign countries." Chinese cities should be developed as both tourist destinations and shopping destinations, Wang said -- but they are prevented from doing so by the luxury tax.

Luxury goods companies seem to be betting on both scenarios, as well as trying new approaches to tap the rising class of consumers. More luxury goods stores continue to open on the Mainland, with companies putting a lot of capital into developing a sales staff. A recent McKinsey report on Chinese luxury demand says that a major risk for companies is failing to open stores in China quickly enough.

Prada filed a request last week to go public in Hong Kong. Analysts say this is both for brand awareness in Asia, as well as to tap the avalanche of Chinese money flowing into Hong Kong. Samsonite Corporation, the luggage company, is reportedly also considering listing shares in Hong Kong. Hermès, which has 20 stores in China and saw its Asian sales grow by 45% in the fourth quarter of last year, just launched Shang Xia, a Chinese spinoff brand.

Some analysts say that the government's goal of maintaining a relatively peaceful society without a large wealth gap may actually lead it to lower taxes and build up luxurious tastes. According to HSBC's Rambourg, there are rumors that the "watch tax" could be lowered soon or dropped altogether. "That," he says, "would contradict this idea of clamping down on luxury goods."

Why it's time to buy China
Subscribe to Fortune