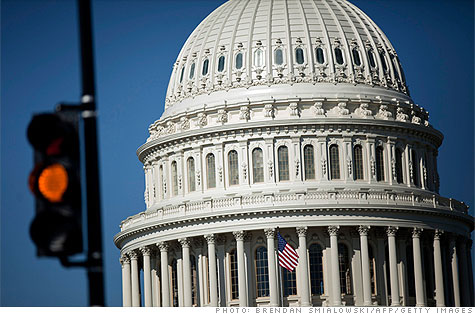 Earmark reform: The end-arounds have begun -- Steve Ellis is Vice President at Taxpayers for Common Sense, a nonpartisan budget watchdog.

With much ado and chest-thumping -- and a bit of wailing and gnashing of teeth -- earmarks have been effectively banned for the next two years in Congress.

Gone are the days when lawmakers would slip their pet projects into legislation to benefit special interests. No more bridges to nowhere! Victory for smart budgeting!

Earmarks are through. But the end runs have already begun.

Lawmakers who still want to take credit for projects back home are figuring out ways to keep the gravy train running.

The most obvious end run will be what's called letter-marking -- lawmakers write to executive branch officials trying to get money spent in their district. (Take the CNNMoney deficit quiz.)

Just like any citizen, members of Congress have the right to write agency officials about their needs, but that shouldn't usurp merit-based, competitive decision-making.

Similarly other lawmakers will try the phone-marking route -- dialing for dollars.

Essentially, phone-marking is what happens when a powerful politician picks up the phone and bends the ear of an agency official about how a pot of money should be doled out.

Phone-marking can be completely appropriate. But it's also in part how former congressman -- now convict -- Duke Cunningham operated. Part of the reason he traded his pin stripes for prison stripes is that he would take a bribe and then brow-beat agency officials to spend general funds on the "right" project.

What's wrong with the no-new-taxes pledge

No one wants to go back to the bad old days, where powerful chairmen of the appropriations subcommittees -- so-called cardinals -- would give agencies their budgets and tell them where to spend the money.

We need transparency and accountability.

To that end, Congress will have to work with the executive branch to create processes to make sure funds get awarded according to merit, competition or formulas.

The criteria and metrics used to make funding decisions have to be transparent. And importantly, lawmakers have to haul agency officials back before them to justify the decisions they have made. It doesn't make sense to just substitute one politically motivated decision (by Congress) for another (by the administration). This also maintains congressional involvement and direction and retains the power of the purse.

Under his rules, lawmakers can offer amendments to a bill that would add funds to more general accounts. The money can't go to particular projects or exact programs but to more overarching accounts.

In addition, lawmakers will have to direct that the Defense Department allocate funds on the basis of competition and merit.

It's unclear exactly how this will shake out, but McKeon deserves credit for tackling the issue and putting forth a thoughtful approach. The proof will be in the pudding.

We are at a fiscal crossroads. Yes, earmark spending was never a big part of the budget. But it took a disproportionate amount of time, served as a petri dish for corruption and perpetuated inequitable spending.

Fixing earmarks could also have a disproportionate impact -- if Congress polices the end runs around the earmark ban.

By making funding decisions more transparent, making the budget more accessible, the benefit to taxpayers would extend to even greater areas of the budget.

The ugly math of Medicare