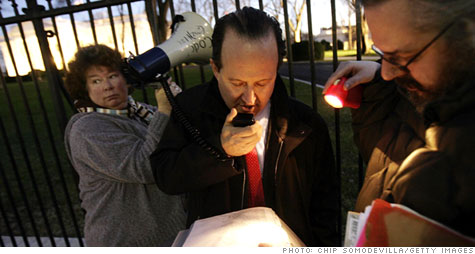 NEW YORK (CNNMoney) -- A longtime Huffington Post blogger has filed a lawsuit against the site, its two co-founders and new owner AOL, seeking $105 million on behalf of himself and 9,000 other unpaid bloggers.

The suit is being led by Jonathan Tasini, a journalist and union organizer, who filed the complaint Tuesday in U.S. District Court for the Southern District of New York. Tasini is seeking class-action status for the case. (Click here to read the lawsuit.)

Tasini says Arianna Huffington personally invited him to blog for the Huffington Post in 2005, shortly after the site launched. He subsequently wrote 216 unpaid posts for the site, though he stopped blogging after AOL (AOL) agreed to buy it on February 7.

"The value added by the content provided by [the unpaid bloggers] to TheHuffingtonPost.com's price was at least $105 million, none of which was shared," the legal complaint says.

Tasini himself goes much further in his comments about HuffPo and its founder: "It's hard to find a bigger example of hypocrisy. Arianna has made her name on standing up for the little guy -- meanwhile, she is behaving exactly like Goldman Sachs and all the robber barons."

HuffPo bloggers, Tasini says, "are merely slaves on Arianna's plantation. We do all the work and she won't share a dime."

A Huffington Post spokesman said "the lawsuit is without merit."

He compared the site's unpaid bloggers with the "hundreds of people [who] go on TV shows to promote their views and ideas." He also pointed out bloggers can cross-post their work on other sites, and that the company does employ a full-time, paid staff as well.

For all his vitriol, Tasini says the lawsuit wasn't his idea. In fact, it was the brainchild of the two Kurzon Strauss lawyers who are now representing him.

"Speaking for myself only, I'm looking to set some standard for blogging as we move forward," Tasini says. "If we don't set standards now, we'll move into a spot where creators can't make a living."

Tasini has deep roots in digital journalism -- and in court battles over it. He was the lead plaintiff in the landmark 2001 Supreme Court case New York Times Co. vs. Tasini, which focused on publications' rights to license freelancers' work for distribution through electronic databases like LexisNexis. The case was decided in favor of the plaintiffs.

In the case against the Huffington Post, Tasini says he would be willing to settle out of court "if Arianna suggested something fair."