We can afford clean energy. We have no choice. 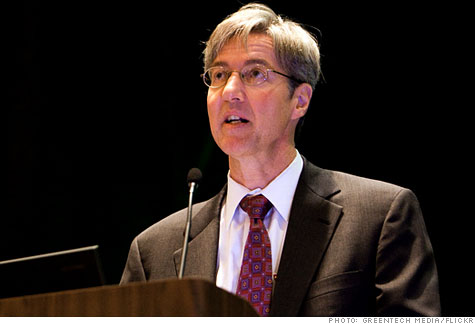 FORTUNE -- Ralph Izzo is CEO of New Jersey's Public Service Enterprise Group (PSEG), one of the ten largest electric companies in the United States, but he wasn't always a corporate guy. He has a PhD in applied physics from Columbia, which led to a stint as a research scientist at Princeton's Plasma Physics Laboratory studying nuclear fusion, and a long list of academic publications in the arcane field of magnetohydrodynamics.

He's been a science advisor to former New Jersey Senator Bill Bradley, a Democrat, and former New Jersey Governor Thomas Kean, a Republican. And he's on the board of directors of the New Jersey Chamber of Commerce, which I mention only because a few years ago, Izzo pulled PSEG out of the US Chamber after the lobbying group opposed climate change legislation passed by the House of Representatives.

At Fortune's Brainstorm Green conference last week in Dana Point, California, I asked him why he did that.

We did not join the National Association of Manufacturers, either. Both of those organizations do good things for the business community. But climate was an area that was really important to us, and we just had a different point of view.

Are a lot of power companies taking principled stands against the Chamber on climate issues, or just a couple of freaks?

[Laughter] A couple of freaks. Pacific Gas & Electric did it, too. Climate change, to me, is very easily understood. The greenhouse effect is something we learn in high-school chemistry. It's not something that you need to be a rocket scientist to understand. But for many people, it's a little bit more removed. And there are enough scientists who are able and willing to say the precision around it is not one the models will be able to pinpoint. Scientific debate is an essential part of the scientific discovery process. But that can get used by policy makers to create enough doubt that people say, "I can't afford this now."

I'm not one of those. I know when the preponderance of evidence pushes you in a certain direction. My big concern always was that this is a five-decade battle. And I just worry that a society that's willing to saddle its future generations with the type of national debt that we have is probably also a society that is not willing to pay the price to avoid saddling future generations with the kind of environmental problems that we're going to burden them with.

In light of events in Japan, do you still think nuclear power is safe?

What I'm about to say is based on the fragmented information we have now: Our plants seem to be much better able to deal with a severe accident of this nature. Now, our analogous situations would be hurricane and flooding; we're not in a seismic zone in any of our plants. But our fuel pools are in secondary containment buildings that are concrete structures with four to six inches of concrete. We have auxiliary spray capability. We don't have one diesel generator per unit; we have four in our Hope Creek plant and six in our two Salem units. We have separation and elevation for our emergency safety system switch gear. Does that mean that we've thought of everything? Absolutely not. Will we learn some things? I think the answer is absolutely yes.

Has Japan changed your thinking about what kinds of new plants to build?

Japan is not going to affect our decisions. I think right now the new supply selection criteria are all driven by your view on where fuel prices are going. And given the fairly stable pricing environment that natural gas has and the continued environmental challenges that coal will see, we're pretty much leaning towards natural gas in all our new buildings.

I wonder if massive new investment by the power industry in natural gas is really the best choice for the environment. It's cleaner than coal, but is it clean enough?

Clean enough for the next decade or two. It's half of the carbon of coal. It's every bit as much of a challenge in terms of nitrogen oxide and ozone. But it's none of the mercury. It's none of the sulphur dioxide. It's none of the fine particulates. So it is cleaner. If you would allow me, I'd say it's much cleaner. Remember, early on -- by that I mean a few years ago, when we were talking about this set of Clean Air Act amendments coming through -- the criticism was that it would lead to a dash to gas. And implicit in that criticism was that the nation couldn't afford it, not that it wasn't a smart thing to do from an environmental point of view. And now what we're finding is 'bring it on.' [Laughs] No matter what we throw at natural gas, it stays in the $4 to $6 range in everybody's assumptions. Gas now becomes a very reliable domestic fuel supply that seems to be a fairly good middle-term solution that may have even longer-term applications.

Are you doing anything with wind?

We are. We are one of three winning bidders in the solicitation that New Jersey had for offshore wind. Right now we are on a path to develop 350 megawatts about 20 miles offshore from Atlantic City. New Jersey's enabling legislation for offshore wind requires that it pass what's called a net economic benefit test, and that hasn't been fully defined yet.

You've said that saving energy isn't just about smart grids and other high-tech solutions; it's about caulking, insulation and compact fluorescent bulbs. Do you mean as a first step?

Yes, but it's not a small step. We are in love with technology. We think that we can make that house so smart that it knows when to shut itself off and turn itself on. And we can do that. But that's expensive. I mean, we have a lot of people who don't have adequate insulation in their homes. There's plastic that you can put on your windows for certain months of the year. There are heavier curtains that you can use for certain months of the year. It's not just about bits and bytes and chips.

You've got a governor in New Jersey, Chris Christie, who seems dead set on building a national reputation as the kind of guy who comes in and cuts and slashes government. Is that having an impact on financing for programs to promote clean energy?

It is, but I think in a constructive way. A lot of what stimulated New Jersey's early interest in renewables was almost a religious fervor. And the assumptions were fraught with job creation assumptions. What the new governor has said is, "Look, I think that's great. And I want us to do that. Now, explain to me how it's happening. Show me that we're making progress." So for example, enabling legislation in offshore wind, as I mentioned before, had this net economic benefit test.

The reason why I say that's constructive and beneficial in the long term is that I am so worried that without that kind of discipline, the public wakes up and says, "You didn't tell me that this costs this much." Now, we have at every step of the way told people what these programs cost. But when you're worried about why your kid's not performing in school and whether your boss is being a pain in the neck, that kind of gets lost in the clutter.

And so therefore it's cold comfort for me to be able to say five years from now when somebody calls me to task on 35 cents per kilowatt hour of solar, "I told you so." I think the net economic benefit test is an intelligent one for the long-term health of the industry. Governor Christie has introduced an element of practicality and pragmatism to the discussion that, while it will slow down the pace in the near term, I think in the long term will be beneficial.