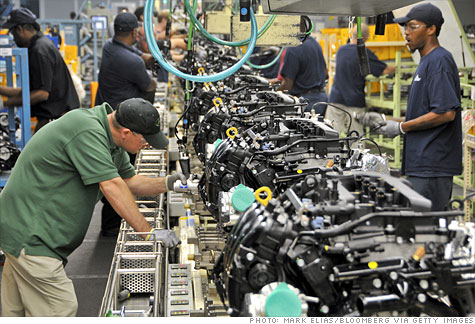 FORTUNE -- Like independent manufacturers across the country, Saegertown, PA-based Acutec Precision Machining saw its business ravaged by the Great Recession.

Big customers like GE (GE, Fortune 500) first scrambled to freeze orders and then tried to return inventory as dire outlooks for the US economy swirled, CEO Rob Smith recalls. The company, which makes machine parts mainly for the aerospace and power generation industries, embarked on brutal cuts, paring its payrolls from 250 to 205 workers by the winter of 2009 amid plummeting sales.

But today, less than two years later, the situation could hardly be more different.

Sales are booming and the company is struggling to keep up with new customer orders, Smith says. The company is now up to 275 employees and pounding the pavement for 20 additional machinists.

"Customers are frustrated and ask us if we can work overtime, but we have to tell them we are already working overtime," Smith says. "We went from famine to feast."

The major challenge for the industry now, manufacturers say, is the shortage of skilled workers to keep up with resurgent demand. Elk Grove Village, IL-based Acme Industries has added 21 jobs since November 2010 to a total of 135 employees and is currently trying to fill eight openings.

"All the stars seem to have aligned and growth is very robust," said Bob Clifford, vice president of Acme, which makes parts used in small diesel engines and natural gas excavation, among other applications.

The fortunes of the manufacturing sector lagged far behind the rest of the economy during the 1991 and 2001 economic recoveries. Many saw the sector in terminal decline -- competition from low wage countries and continued job losses seemed inevitable over much of the last decade.

So it's a bit of a surprise that the sector is instead far outpacing the rest of the economy during this recovery and adding jobs ahead of other industries.

As the broader economy limps along -- economists at Bank of America and Goldman Sachs recently forecast quarterly growth at just 1.5% and 2.5% respectively -- recent manufacturing activity is instead in line with an economy expanding at 6.5%, analysts at Ned Davis Research wrote in a recent note to clients.

And that strength is translating into job growth. The Bureau of Labor statistics said that the manufacturing sector has added 243,000 private sector jobs since December 2009. While it accounts for 12% of total economic output, manufacturing has driven 18% of private job gains, according to TD Economics.

But some of that strength may merely be a reflection of lackluster growth elsewhere. Christos Shiamptanis, an economist at TD Economics, points out that the continued weakness in areas like construction and housing may make it easier for manufacturing to shine by comparison.

Still, there are significant sources of demand in this manufacturing rebound that weren't there in past recoveries. Namely, the growth in emerging markets.

For instance, Boeing (BA, Fortune 500) plans to add 4,000 to 5,000 new jobs in the next year, and a spokesman cites demand for low cost air carriers in emerging markets as one reason for that growth.

Efforts to move some jobs overseas, meanwhile, have proven to be less advantageous than some manufacturers had hoped. One of Acme's customers, which makes casting and machining equipment, moved production to India but found its new far-flung supply chain unable to respond to the pickup in demand, Clifford says. Some of that capacity is now being moved back to the United States. And sharply rising wages in countries like China and India are reducing the cost advantage for manufacturers.

Some of the rebound, of course, can be traced to how sharp the initial fall was --manufacturers cut to the bone in anticipation of a prolonged global downturn and are now playing catch-up amid resurgent demand.

But it would be a mistake to see the rebound merely as an inventory correction. And the export-intensive German economy offers another window into just how strong the worldwide demand for goods is. Commentators repeatedly wrote off the sharp rebound in German industrial production following the brutal downturn as a dead cat bounce. Retrenchment in overly indebted eurozone economies that Germany had traditionally exported to, meanwhile, was supposed to halt growth.

Manufacturers may be enjoying a new boom, but that doesn't mean they don't still face some economic headwinds. Brad Ohlemacher, CEO of Elyria, OH-based EMC Precision Machining, says that surging commodity prices and the impact of health care reform on labor costs could bring the good times to an end despite a broad based recovery.

And with all those job openings, it's no surprise that there's a shortage of workers with the right skills. "It's a massive problem from the point of view of the recovery," Ohlemacher says. "We can't hire and train fast enough and that means we have to turn down business." EMC Precision makes custom parts for complex machines used in industries ranging from agriculture to medicine.

Skilled machinists make between $60,000 and $80,000 a year, Ohlemacher says. It usually takes about two years of training before they reach maximum productivity.

"Our biggest problem is the lack of qualified technical people," says Smith, noting that the unemployment rate has tumbled to 7% from 12% in Saegertown, PA. "Everybody is back to work and now we find ourselves going through the dregs of people."

Fed should focus on inflation, not jobs
Subscribe to Fortune