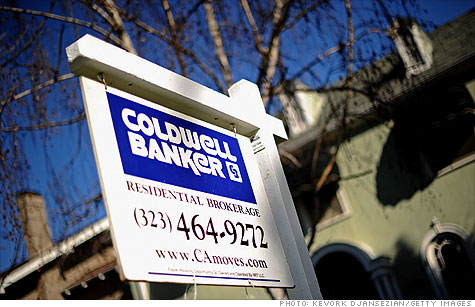 Home sales rose at an annual rate of 5.1 million in March, up 3.7% from February, the National Association of Realtors said Wednesday. However, sales were 6.3% lower than in March 2010.

Government reports released a day earlier showed new home construction and permits for future construction both ticked up in March.

Those reports are not bad, but not great either. Despite slight upticks in home sales and construction, the housing sector is still in the doldrums as supply continues to far outweigh demand for homes.

"Even as buyers scoop up deals of a lifetime, the river of foreclosed properties continues to flow," Douglas Porter, deputy chief economist at BMO Capital Markets, said in a note to investors Wednesday morning.

Meanwhile, some buyers are still finding it tough to get a mortgage, Lawrence Yun, chief economist for the National Association of Realtors, said in a release. The average credit score to get a conventional mortgage has risen to 760 from 720 in 2007.

"Although home sales are coming back without a federal stimulus, sales would be notably stronger if mortgage lending would return to the normal, safe standards that were in place a decade ago -- before the loose lending practices that created the unprecedented boom and bust cycle," he said.

All-cash sales were at a record high in March, accounting for 35% of existing home sales.

The report was roughly in line with economists' forecasts for home sales to grow at an annual rate of 5 million.

It's a good idea to buy a foreclosure. Here's how