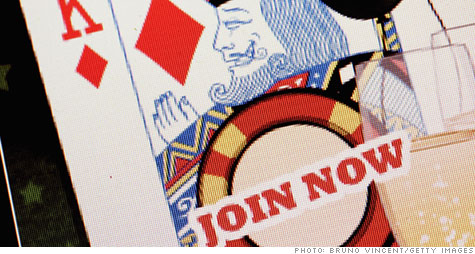 Online poker players will be able to get their money from websites that were recently indicted for bank fraud and money laundering. By Ben Rooney, staff reporterApril 20, 2011: 4:55 PM ET

NEW YORK (CNNMoney) -- Online poker players will be able to withdraw money from accounts at two of the three Internet poker companies recently indicted for bank fraud and money laundering.

The U.S. government agreed Wednesday to allow PokerStars and Full Tilt Poker to resume use of domain names that had been shut down last week.

That will "facilitate the withdrawal of U.S. players' funds held in account with the companies," according to the agreement.

Players in the United States are not allowed to deposit money into their accounts, and the government plans to set up an independent monitor to oversee the transactions.

The agreement also allows for players outside of the United States to resume playing for "real money" on the two Websites.

Despite the agreement, it was unclear Wednesday when the domain names will be restored.

Currently, the domain names of the three companies remain blocked, with a notice stating that violating U.S. gambling laws could result in five years jail time and fines of up to $250,000.

On April 15, federal authorities unsealed a sweeping indictment and civil complaint against 11 people in the United States and abroad, including the founders of PokerStars, Full Tilt Poker and Absolute Poker.

The government alleges that the companies, based offshore, used a network of payment processors to set up fraudulent U.S. bank accounts to launder money from online poker players in the United States. The defendants are also accused of using prepaid cards to disguise gambling profits as legitimate purchases.

While gambling is legal in some U.S. states, a 2006 law prohibits companies from knowingly accepting money from U.S. citizens for gambling over the Internet.

The government had filed "restraining orders" against several bank accounts and the domain names used by the poker companies. However, prosecutors contend that the companies were never required to freeze player accounts.

Preet Bharara, the U.S. Attorney for the Southern District of New York, said no player accounts were ever frozen or restrained, and each poker company has been free to reimburse any player's deposited funds.

"In fact, this office expects the companies to return the money that U.S. players entrusted to them, and we will work with the poker companies to facilitate the return of funds to players," Bharara said in a statement.

The case has roiled the online poker playing community and has broad implications for a cottage industry estimated to be in the billions of dollars.

"Even with today's announcement, millions of Americans are being denied their hobby, avocation and in many cases their livelihood because they remain unable to play poker on the Internet," he said.

Pappas said members of his alliance have sent over 65,000 e-mail messages and letters to federal officials demanding access to their money and criticizing the government's "declaration of war on poker."

"Online poker is not illegal and it's time the government stops treating American poker players like criminals and protect the rights of their constituents," he said.

Prosecutors, meanwhile, maintain that gambling over the Internet is against the law, and that the companies allegedly took in some $3 billion as a result of their illegal activities

Bharara said the companies had been given "repeated warnings and clear notice that their conduct was illegal in the United States."

Despite these warnings, he said the companies "allegedly engaged not merely in the operation of illegal gambling businesses, but in massive wire fraud, bank fraud and money laundering."