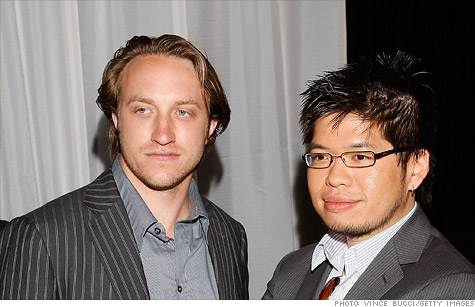 NEW YORK (CNNMoney) -- After months of limbo, the fate of Web bookmarking service Delicious has been decided: YouTube founders Chad Hurley and Steve Chen are buying it from Yahoo.

It will become part of their new Internet company, AVOS. Financial terms of the deal were not disclosed.

"As creators of the largest online video platform, they have firsthand experience enabling millions of users to share their experiences with the world," Delicious wrote in a blog post on Wednesday announcing the deal. "They are committed to running and improving Delicious going forward."

In December, a leaked screenshot of an internal webcast by Yahoo Chief Product Officer Blake Irving displayed Delicious as one of many products slated for "sunset."

The site's operators immediately announced plans to explore a variety of options outside of Yahoo, which bought Delicious in 2005.

"While we have determined that there is not a strategic fit at Yahoo, we believe there is an ideal home for Delicious," the company said on its blog after the leak.

Although the bookmarking site, which launched in 2003, has a cult fanbase, Internet traffic tracker Compete has shown a steady decline in traffic over the last seven months.

In March, the site saw its first increase in unique visits since July 2010. Around 567,000 unique users visited Delicious in March, up from 504,000 in February.

Yahoo (YHOO, Fortune 500) will continue to operate the service until July 2011, when it will officially transfer to AVOS.

"We wanted to find a home for the product where it can receive more love and attention. We think AVOS is that place," Delicious wrote on its blog.