Why Bud Selig is calling the shots at the Dodgers 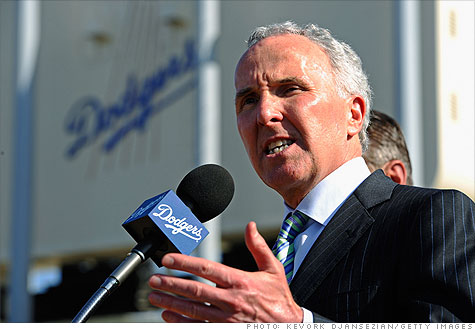 Frank McCourt's fight with Major League Baseball for control of his team has more to do with his debt than his divorce. By Chris Isidore, senior writerApril 29, 2011: 3:54 PM ET

NEW YORK (CNNMoney) -- Los Angeles Dodgers owner Frank McCourt, who's in the process of one of the most public and ugliest divorce proceedings on record, is eager to go to the altar with Fox Sports.

Unfortunately for McCourt, baseball won't swing at his pitch.

McCourt met with officials from Major League Baseball Wednesday, and pressed for approval of a new deal with the News Corp-owned network that he said would give the team an immediate $300 million cash infusion.

But baseball commissioner Bud Selig has put the brakes on the deal, which McCourt claims could give the Dodgers more than $3 billion over the 17-year life of the contract.

Selig also appointed what he calls a monitor to investigate the Dodgers' finances and to have final approval of any business decision. It's the professional sports equivalent of the FDIC taking over a failed bank.

McCourt and Selig have issued conflicting statements about the current financial state of the team and the decision to put the Fox deal on hold. But here's what's really at stake.

The front loading of the Fox contract serves McCourt's pressing need for cash, but would leave the Dodgers a much weaker property down the road.

It's very possible that no matter what the Fox deal is worth, the league would be better off if the Dodgers started their own regional sports network instead of signing a new long-term deal with a big up front payment.

McCourt bought the team, ironically enough from News Corp. (NWS, Fortune 500) for a reported $355 million in 2004. It's worth an estimated $800 million today, according to an analysis from Forbes.

But one baseball executive, speaking on condition his name not be used, said the team has debt of "at least" $500 million. That doesn't even count any money Frank McCourt might have to pay his estranged wife Jamie McCourt, who is fighting to hang onto half of the Dodgers in the divorce proceedings.

Forbes concluded that that almost all of the team's operating profits of about $33 million a year were being used to pay down just the interest.

McCourt says the team is completely current on all its bills and has not turned to the league for financial assistance.

But if McCourt is forced to sell the team and the sales price is hurt because the future broadcast revenue stream has already been spent, that would hurt the value of other franchises. A Dodger spokesman did not return a call seeking comment about team debt and the structuring of the deal.

McCourt said Wednesday he's been waiting since the day he bought the team to strike a new TV deal.

"It'll give the Dodgers the financial wherewithal to compete at the highest levels for years and years to come," he said.

But it doesn't sound as if Fox is even itching to get a deal done immediately. After all, its current contract with the Dodgers runs through 2013.

"This is an issue between the Dodgers and Major League Baseball," said a statement from Fox Sports. "When a resolution is reached, Fox is prepared to provide financial stability for the team and continue as the Dodgers long-time TV partner."

It makes no sense for Fox Sports to side with McCourt in his battle with Selig, given that the network has a much bigger and more lucrative national television deal with MLB.

No matter how McCourt tries to position the Fox deal, closing it today only helps him, not the franchise or its fans.

Still, McCourt is vowing to not give up. "No one handed the Dodgers to me. No one is going to take it away," he said. "I'm not going anywhere."

But McCourt is sounding more and more like a starting pitcher that's out of gas who pleads with his manager to let him face one more batter. Selig is the one who has the power to put a call into the bullpen and get a new owner into the game.

Inside the Mets' financial ledger

What can be learned from the Dodgers' divorce battle