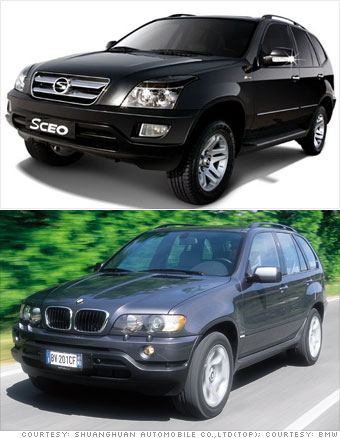 The designers at Shuanghuan must be fans of the German automaker: The popular Chinese carmaker's CEO sports utility vehicle looks a lot like BMW's X5. The CEO, which was unveiled in 2006, sports a 100-horsepower, four-cylinder engine (the BMW has either six cylinders or a V8). When Shuanghuan tried to ship its X5 derivative to Europe last year, BMW fought back. A German court ruled the CEO a rip-off and banned car sales in Germany, but it's sold in Italy.