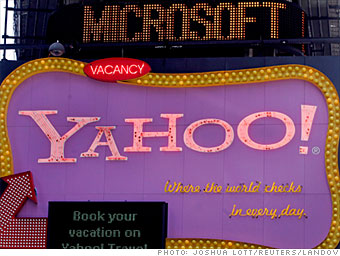 Microsoft runs across a news ticker above a Yahoo sign in New York City May 19.
In a classic case of cluelessness, Yahoo rejected a $31-a-share offer from Microsoft, which had bid 60% above the market price because it was hot to add Yahoo's online heft to better duke it out with Google. Then, when Microsoft offered $33, Yahoo held out for $35. Microsoft walked, and Yahoo did a deal with Google that fell apart. Now Yahoo is selling at about $12. Co-founder Jerry Yang, who's had enough grace to quit as CEO, is asking Microsoft to come back to the table. Good luck, Jerry.

Honorable mention: Carl Icahn, who bought into Yahoo on the assumption that he could get a deal done with Microsoft. By our estimate, he's down almost $1 billion on his $1.8 billion Yahoo investment.