It's almost Thanksgiving, so what better time to discuss turkeys? Of the business variety, of course. Normally the problem is finding enough turkeys to list. Not this year. By Allan Sloan, senior editor at large 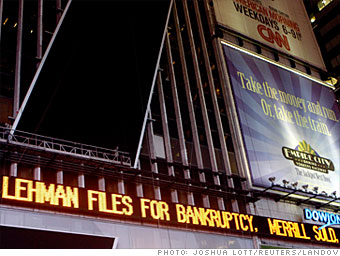 A news ticker in New York's Times Square September 15.
Letting Lehman Brothers go into bankruptcy in September is the turkey of the year, if not the decade, for the Federal Reserve and the Treasury. Lehman's failure set off a round of market freeze-ups and panics that we're still coping with. Among other things, it led to the Reserve Primary money market fund breaking the buck, which threatened a retail panic that forced the Fed and Treasury to intervene.

Plenty of people have been wrong about Lehman - including Lehman itself, which this year spent $761 million buying its own stock at an average price of $49.60. Recent price: 5 cents.

After letting Bear Stearns implode in March, the Fed seemed determined to protect Lehman. Players who thought the firm was safe ranged from Lehman chief executive Dick Fuld (who during the endgame kept holding out for better terms to raise capital that never came) to my employer, Time Inc. (which has taken a $30 million loss on 12 floors in the Time & Life Building it sublet to Lehman in 2007), to yours truly (who wrote in June that "Lehman won't fail"). Oh, well.