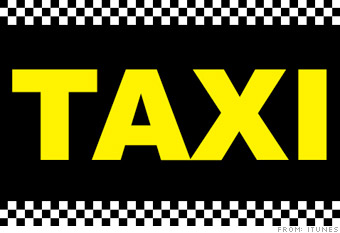 • App store: One year later
Developer: iSignz
Price: Free
Designed for tourists who fear that big-city cabbies will ignore their waves and whistles and drive on by, this app does the whistling for you. And when you tilt your iPhone horizontally, it flashes the word "TAXI" colorfully and rapidly enough to require a disclaimer. (It can trigger seizures when used near epileptics.)

One reviewer suggested that if you are going to wave it around the streets of New York, it should really be flashing "STEAL ME."