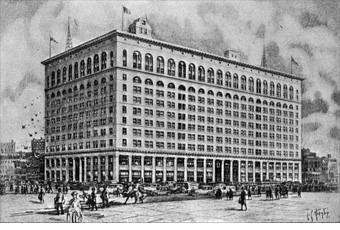 Wanamaker's Philadelphia departments store in 1903
Often considered the father of creative ads, Powers -- a former publisher of The Nation -- was hired as the first full-time ad copywriter by department store owner John Wanamaker in 1880.

Powers quickly became one of the most expensive copywriters, known for writing ads that were honest, simple and straightforward. His approach to advertising: Get the reader's attention. Famously he once said, "If the truth isn't tellable fix it so it is."