6 deals in the desert 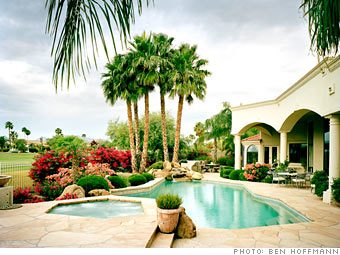 With its resort-style backyard and a rooftop patio with 360-degree views of the surrounding mountains, this golf-course home in the Rio Verde community sold for just over $1 million in 2006.

The median sale price in April for a single-family dwelling in Maricopa County -- which includes Phoenix, Mesa, and Scottsdale, and is Arizona's largest metropolitan region -- was $125,000, down from $230,000 a year ago. That's a 46% drop in 12 months.

Even as home sales rise, cheap, bank-owned properties are flooding the market: 1,042 appeared in April alone, plus 8,396 new pre-foreclosures, where the borrower has stopped paying and the eviction process is underway.

Paste this link into your favorite RSS desktop reader
See all CNNMoney.com RSS FEEDS (close)
More Retire Rich 2009
• Retirement deals around the nation
• Fortune 40: The best stocks to retire on
• You can still retire rich...really
• 5 smart stocks from the fool
More Galleries