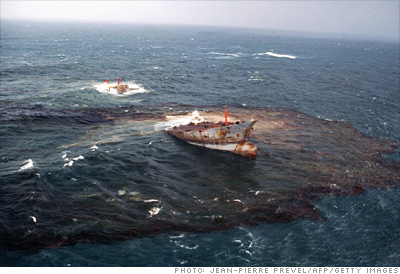 Spill size: 227,000 tons
Responsible party: Amoco
Cost: $85.2 million
Inflation-adjusted: $3 billion
In 1978, the Amoco Cadiz ran aground outside of a beautiful stretch of French coast. The crash split the ship in half, and released 227,000 tons of oil into the ocean. The oil was smashed into a toxic mixture by heavy waves in bad weather.

"Because it was in such a popular area and because the marine life was there, they did a lot of science and they did a lot of reporting of it," says Wes Tunnell, the Associate Director of the Harte Research Institute for Gulf of Mexico Studies in Corpus Christie, Texas.