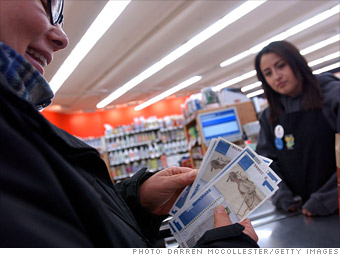 Musician Jay-Z might be rapping about the monetary glitz of George Washington in a U.S. dollar bill, but if he was in the tiny county of Berkshire in western Massachusetts, he'd probably be paying homage to writer W.E.B. Du Bois and painter Norman Rockwell. The famous former residents are featured in BerkShares, the area's alternative currency. It's not nationally recognized as the official tender, but instead used in area businesses that choose to accept the colorful bills.

Here's how BerkShares work: Go to any one of the county's five participating banks (there are 13 branches in total). If you hand the teller $95, you'll get back $100 worth of BerkShares -- a discount intended to lure users. The currency can be used at bakeries, dentist offices and some 400 other businesses that recognize the multi-colored bills. Founded in 2006, BerkShares are based on the idea that local currencies help local economies thrive.

More than $2.5 million in BerkShares has been issued since inception, but the currency has gone through setbacks amid the economic downturn. Out of the 835,000 BerkShares printed, only 135,000 are circulating today, says Susan Witt, executive director of the nonprofit New Economics Institute, which has been behind the currency.

Since the days of the Great Depression, local currencies have been known to flourish during tough economic times, but BerkShares have become the exception.

NEXT: Ithaca Hours
Last updated July 21 2010: 1:00 PM ET
More
• Is deflation the problem that will throw us into a depression?
• Dumping the dollar: Why it's time to diversify
• The wrong fix for small business lending
More Galleries