When they were young: 10 business leaders under 40 way back when 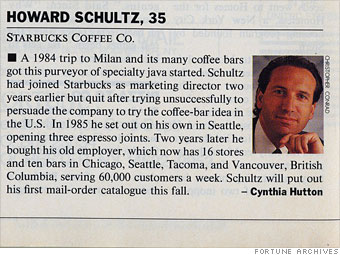 Most Americans know that if they want, say, a triple grande nonfat latte, they can probably find a Starbucks location within five blocks of their home. After all, there are nearly 10,000 company-operated store locations worldwide, with over 6,700 of those in the U.S.

But back when we included CEO Howard Schultz in an "On the Rise" feature in our October 24, 1988 issue, Starbucks had just "16 stores and ten bars in Chicago, Seattle, Tacoma, and Vancouver." Schultz, 35 at the time, was indeed rising, and his company continues to do so today. This year, it hopped to #241 (from #261 in 2009) on our Fortune 500 list and Schultz still helms it, after taking an eight-year hiatus from the CEO spot.

NEXT: Jeff Bezos, Amazon
Last updated December 01 2010: 6:26 PM ET
More from Fortune
40 reasons why it's great to be a business leader under 40
You don't have to worry about a sagging 401k and you can relate to your Gen Y employees. Why it's great to be at the top before middle age. More
20 Highest paid under 40
Which young executives at public companies brought home the most bacon this year? And exactly how much bacon are we talking about? More
40 under 40
Meet this year's class of youthful movers and shakers. They're innovating, they're expanding, and they're not really thinking about the recession. More