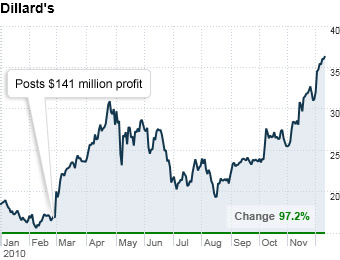 Dillard's managed to make a major comeback, even as the retail sector continued to struggle. The company sold more merchandise this November than last year, with sales totaling almost $470 million for the month. That marked a 7% increase over last year.

It hasn't been easy. Dillard's has had to significantly cut costs to stay afloat. Since 2008, the retailer has closed six stores and introduced new strategies to manage its inventory. These started paying off in 2009, when the department store owner pulled in a net gain of $68 million, compared to a net loss of $241 million the year before. These moves continue to pay off. At the start of 2010, Dillard's reported net income of $48.8 million in the first quarter, compared to net income of $7.7 million in the prior year.

Money managers' picks for 2011
Credit card companies, commodities, IT sector and more - check out what top fund managers will be buying in 2011. More