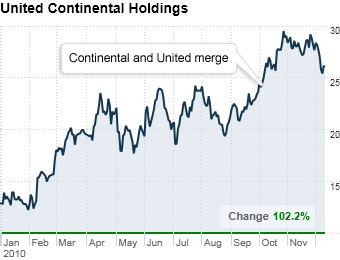 On Oct. 1, two powerhouse airlines joined forces. United Airlines and Continental swapped roughly $3 billion worth of stock to form United Continental Holdings. The deal ousted Delta Airlines as the world's biggest carrier by airline traffic, and investors are betting that that dominance will pay off.

The two airlines will continue to operate separately for the next year or so as the merger moves through the regulatory process.

In December, Continental Holdings announced plans to team up with partners in Latin America and Canada, spreading the reach of the airline, and possibly gaining immunity to antitrust laws in those countries. Airlines that form international partnerships can sidestep antitrust laws in order to make scheduling easier if the Department of Transportation grants permission. In November, Continental Airlines and United Airlines both gained anti-trust immunity for an alliance formed with Japan's All Nippon Airways.

Money managers' picks for 2011
Credit card companies, commodities, IT sector and more - check out what top fund managers will be buying in 2011. More