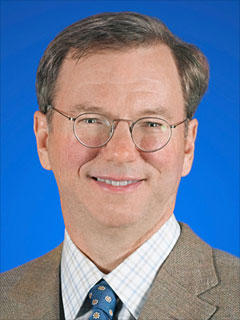 Forget the iPhone. This year was all about Android. Google's mobile operating system became the most popular platform in the U.S. -- this fall 44% of smartphones sold were Androids, vs. iPhone's 23% -- by adding 200,000 users a day, a pace that should take it to a half-billion handsets by 2015. Having all but monopolized the search business, Google is continuing its push into social media (despite the utter embarrassment of Buzz). In the past few months the company has purchased five social-networking companies -- including the gaming site Slide -- and invested big in Zynga.

NEXT: 12. Mark Pincus
Last updated November 19 2010: 10:47 AM ET
More from Fortune
Reader's Choice
After a month of rabid online voting you crowned your own Businessperson of the Year. More
Reed Hastings: Leader of the pack
Executives from Silicon Valley to Hollywood to Wall Street admires his savvy persistence - and his company's cool culture. The secret to the Netflix CEO's success? He never stops looking over his shoulder. More
When they were young
Michael Dell was 21 when he first appeared in Fortune. Bill Gates made the cover when he was 30. Here's a look back at some of today's biggest business leaders when they were climbing the corporate ladder. More