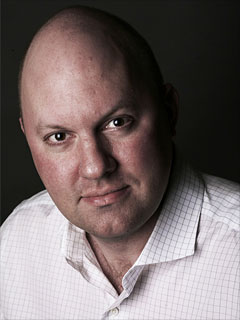 Despite tough fundraising times for venture capitalists, the web browser pioneer (Mosaic, Netscape) raised $650 million this fall -- over just three weeks -- with partner Ben Horowitz. That's on top of the $300 million the two raised earlier this year. Among his two-dozen portfolio companies: Digg, Foursquare, Skype, and Zynga. Already on the boards of Facebook, eBay, and Hewlett-Packard (where he took a leading role in ousting CEO Mark Hurd), Andreessen looks to take a board seat anytime the company invests north of $5 million.

NEXT: 20. Shlomo Yanai
Last updated November 19 2010: 10:47 AM ET
More from Fortune
Reader's Choice
After a month of rabid online voting you crowned your own Businessperson of the Year. More
Reed Hastings: Leader of the pack
Executives from Silicon Valley to Hollywood to Wall Street admires his savvy persistence - and his company's cool culture. The secret to the Netflix CEO's success? He never stops looking over his shoulder. More
When they were young
Michael Dell was 21 when he first appeared in Fortune. Bill Gates made the cover when he was 30. Here's a look back at some of today's biggest business leaders when they were climbing the corporate ladder. More