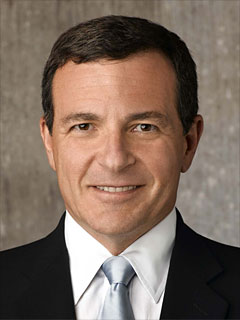 After paying $4 billion for Marvel Entertainment earlier this year, Iger unloaded money-losing Miramax Films for $660 million and bought web-gaming outfit Playdom for $563 million. In television, ESPN just delivered its best ratings year ever. And though the recession put a damper on its theme park business, the company's motion picture units made up for the shortfall with Toy Story 3 and Alice in Wonderland, both of which topped the $1 billion mark at the box office. Stock is handily outperforming the market.

NEXT: 23. Irene Rosenfeld
Last updated November 19 2010: 10:47 AM ET
More from Fortune
Reader's Choice
After a month of rabid online voting you crowned your own Businessperson of the Year. More
Reed Hastings: Leader of the pack
Executives from Silicon Valley to Hollywood to Wall Street admires his savvy persistence - and his company's cool culture. The secret to the Netflix CEO's success? He never stops looking over his shoulder. More
When they were young
Michael Dell was 21 when he first appeared in Fortune. Bill Gates made the cover when he was 30. Here's a look back at some of today's biggest business leaders when they were climbing the corporate ladder. More