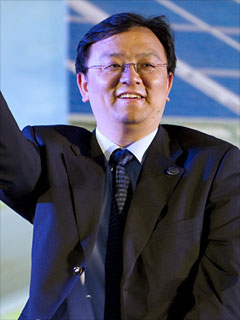 BYD was built on creating batteries (instead of importing batteries from Japan, Wang had them built -- by hand -- in China), but its future is in cars. Last year BYD began selling its first electric car in China. This year it announced plans to establish its North American headquarters in Los Angeles in advance of a U.S. model, due in 2011, and a new electric line in partnership with Daimler. Wang counts Warren Buffett as a backer; the legendary investor's $230 million stake is now worth $1.2 billion.

NEXT: 22. Bob Iger
Last updated November 19 2010: 10:47 AM ET
More from Fortune
Reader's Choice
After a month of rabid online voting you crowned your own Businessperson of the Year. More
Reed Hastings: Leader of the pack
Executives from Silicon Valley to Hollywood to Wall Street admires his savvy persistence - and his company's cool culture. The secret to the Netflix CEO's success? He never stops looking over his shoulder. More
When they were young
Michael Dell was 21 when he first appeared in Fortune. Bill Gates made the cover when he was 30. Here's a look back at some of today's biggest business leaders when they were climbing the corporate ladder. More